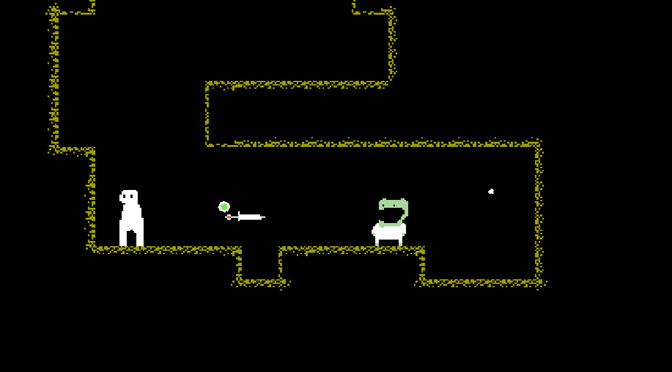 I’ve returned after letting my wife take over the piece last week for her Pokemon Go review. Naturally, I can’t bring anything to the table that matches its popularity, but I’ve still got a good game  for all of you to check out.

This week I ended up spending my time with a browser game called “Shword.” Before anyone thinks it, yes, I immediately thought of saying the word “Sword” in a Brooklyn accent. The game is a platformer with heavy puzzle elements added to it.

Shword is a game that puts players in control of an unnamed individual that has the ability to shoot swords in four different directions. These aren’t your average, everyday swords. These ones allow the player to teleport to them. This can be done after the swords stick into a wall, ceiling or floor, as well as when they are still flying through the air.

The ability to teleport to swords results in a lot of neat puzzles that players will have to solve to progress forward. This works well with the platforming elements of the game, which are a little bare. Players can move left, right and jump. That’s really it. Honestly, it left me with a feeling similar to Portal, but it was different enough that it stuck out as its own game.

One thing that might bother players about Shword is its length. The game only takes about 10 to 15 minutes to complete. This isn’t really all that long. The game doesn’t have a menu so players can go back to previous levels easily, which is a bit of an annoyance. The developer did say that they’re looking at making a sequel, though. They mentioned it being much longer and a Steam release. Here’s hoping it goes well for them and I’ll definitely be keeping my eye out for it.

The graphics in Shword are distinct. They’re 2D sprites, but they have their own feel to them. Everything feels a little rough, but intentional. Kind of like some older cartoons that I grew up on like Rugrats or Ed, Edd n Eddy, but with pixels. The stages also change colors in between deaths, which helps the game keep a fresh look. Animations are minimal, but what’s there looks great. This includes the main character’s walking animation, which looks like it goes to the beat of the background music.

Shword only has couple of songs, but it can get away with this. First of all, the game is so short that it doesn’t need a wide array of music. Secondly, these songs are incredibly catchy. Sound effects in the game are also well executed and mesh with the rest of the presentation.

Overall, I found Shword to be an entertaining adventure. It may only last for a short time, but it’ll challenge players to think a little bit before acting. The game’s visuals and audio also match up well and add to the experience. You should really go check it out for yourself!