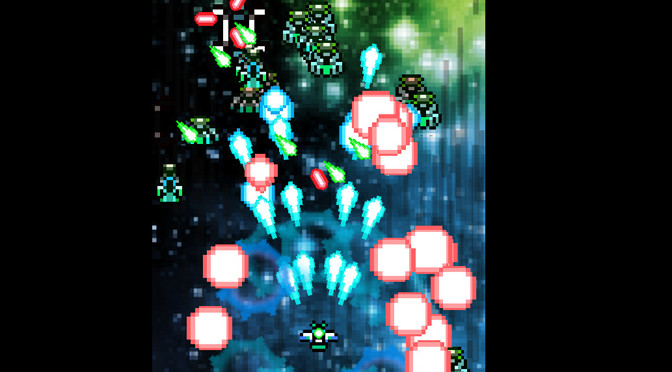 This week I spent my time with Ruzh Delta Z. It’s a top-down shooter that I discovered on Steam for a couple bucks a week ago. At the time I bought it, there was a 50% sale. So, I really bought this game for $1. The sale is still going on today if you’re interested.

Being a top-down shooter, there isn’t much in the way of story to Ruzh Delta Z. In fact, I don’t think there really is a story. Players are just dropped into the game with a ship and told to kill everything that moves.

The gameplay of Ruzh Delta Z is solid. Players will have to weave and dodge around non-stop enemy fire to stay alive. Luckily, the game has solid hitboxes. This means you only get hit if you failed to move out of the way from an attack.

Bosses drop in to levels, and sometimes start at the beginning,  to give players a challenge. The boss fights add a lot of extra fire for the player to dodge, but they don’t do much else. There are a few simple patterns to learn, but it feels more like the game is willing to just throw a huge amount of shots at the player instead of having them remember a boss’ strategy.

The controls in Ruzh Delta Z can be hard to get used to. The game allows for three control types. The mouse, arrow keys and a controller.

I first tried out the mouse and it wasn’t a bad option. The only problem I had with it was that you have to click down to move the ship. This resulted in a tired finger after extended play of the game.

The second option for controlling the ship is arrow keys. I typically don’t mind using arrow keys, but here it just felt off. I couldn’t get the ship to move like I wanted it to and died a lot more as a result.

The final control scheme used a controller. I chose my trusty Xbox 360 MadCatz controller (seriously, I’ve had this thing for eight year and put it through heavy play and it still works great) for the job. At first I wasn’t doing so hot, but once I turned down the sensitivity it felt great. This is easily the best control option and it helped with the nostalgia factor. It reminded me of sitting in front of a TV all night long with my friends as we played through games like TwinBee, Gradius and R-Type.

Ruzh Delta Z offers players the option of using two different ships. Each of these ships have their own unique weapons. The variety is nice and it offers players the ability to choose the ship that better suits them. However, I wish there was an option to mix and match weapons so that players could create their own custom configurations.

The graphics in Ruzh Delta Z are alright. There’s a lot of the screen at once and it looks great with all that going on. My only real problems with the game was that all backgrounds look the same and bosses are hard to tell apart. Changing environments, or even just more background detail, would’ve been nice. The same goes for the bosses.

The audio in Ruzh Delta Z is also good. The sound effects work well and it has a couple of music tracks that I really found myself enjoying. Heck, I started basing which level I played on the music.

Overall, Ruzh Delta Z is a good top-down shooter, but it’s not great. However, for $1 or $2, it’s worth it. There is a real lack of top-down shooters anymore and you can only go back and play the old ones so many times before you want something new. With that being said, I’d advise fans of the genre to pick this game up for a couple of hours of entertainment.

Ruzh Delta Z shoots its way to 3 GiN Gems out of 5!