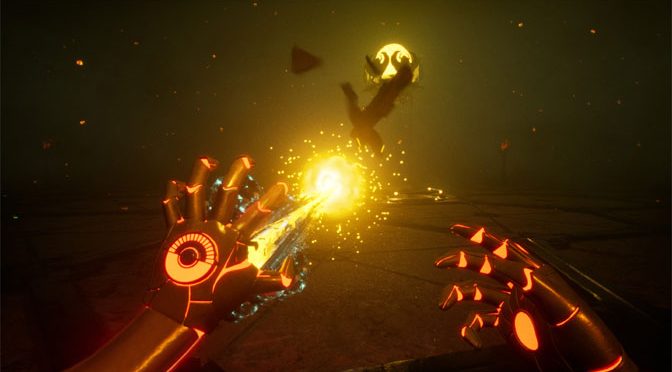 Void Slayer is an arena-based shooter that’s generally pretty streamlined with one major twist. The story theoretically exists, but it does not affect gameplay at all. The real interest in Void Slayer is that as you take damage, you literally lose bits of the floor in the arena. If you’re looking for a very particular experience or just to do something fast-paced and shooty for a while to blow off steam, Void Slayer could be a solid option for you. 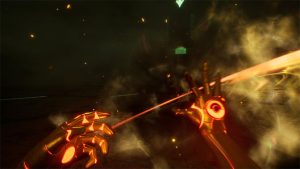 According to the blurb on the Steam store, your character was once mortal but has now been cast into the void by some nameless gods. Your character’s iron will keeps you from entirely plummeting, but you do have to fend off void monsters who want to complete the Gods’ work. You use magic gloves for that, apparently.

I’ll confess that I had to look up the blurb on Steam because I honestly had no idea what the plot was when I played Void Slayer. That’s literally all there is, and as I said, it gives only the barest explanation of the game. 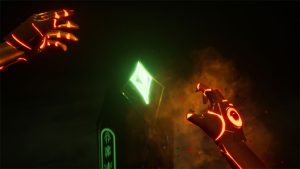 Void Slayer’s dominating characteristic is that it’s a very, very stripped down shooter. Void Slayer throws you into the thick of things with minimal tutorial, though hints will tell you to destroy crystals and that you can double jump. Destroying the crystals provides your gloves with necessary power ups, eventually. There’s a set progression for this process, meaning that you have to destroy certain number of crystals per upgrade.

Your gloves provide you with two attacks: a beam weapon, accessed via left click, and a blast attack, which you deploy by right-clicking. Again, that’s it, aside from the familiar ASWD movement keys. Your enjoyment of Void Slayer will hinge on whether or not the game’s extremely pared down aesthetic rubs you the right way. Don’t look for progression because you’ll find none. Don’t look for the ability to amass countless upgrades or character builds because you’ll be disappointed. Don’t even look for interesting graphics or audio as Void Slayer lacks both.

What it does have, however, is a grasp on exactly what it is that makes a good FPS tick. Understand that I’m not saying that story and graphics don’t contribute to the experience of an FPS; I’m simply saying that at the end of the day, you pick an FPS to play because it lets you shoot things. Void Slayer unashamedly provides exactly that opportunity with just enough interesting movement to keep you engaged. 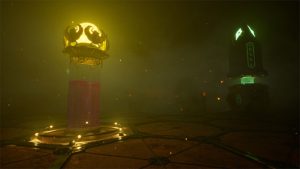 The game’s big twist, if it can be said to have one, is that the arena serves as your health measure. When you take damage, hexagons on the floor will disappear, increasing the likelihood that you’ll fall to your doom. I suppose that’s where the story comes into play. You can repair the arena if you manage to remove the icon in the fountain centrally located on the map. Once you destroy the icon, the fountain will start spitting out blasts that replace the missing tiles at random. 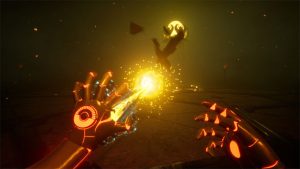 Another key feature in Void Slayer is understanding how best to use your rechargeable dash ability. Fortunately, the ability boasts a rapid recharge, but if you look around the arena, you’ll notice various purple points of light. Each one of those lights, when they appear, serves as a dash point. You can cross to that point without touching the floor, key if you’ve taking a great deal of damage. It’s a great way to clear areas where enemies pin you down. 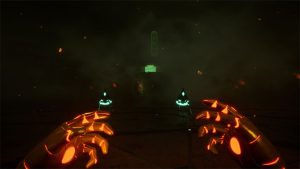 The enemy creatures in Void Slayer spawn from obelisk towers that spawn randomly around the arena. You can and should use the dash points that similarly spawn under these towers to get to the top of these towers as soon as possible. Destroying the crystal at the top of the tower removes the tower’s ability to spawn mobs, and becoming overwhelmed with enemies happens frequently in Void Slayer. At least, that was my experience.

Aside from the health mechanic and using dash effectively, there’s not much else to learn in Void Slayer. Again, the point of the game is not to progress. You really play as long as you can to survive as long as you can and possible capture a space on the leader board, and that’s the game. Let me be clear, this is actually one of Void Slayer’s strengths, aside from its more than reasonable $4.99 price tag on Steam. 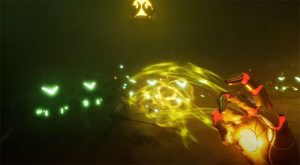 Void Slayer embraces the concept of “streamlined” almost as a raison d’etre, which makes it perfect for playing in short bursts. You aren’t going to have to worry about remembering combinations or obscure plot points, and there’s no equipment management, making the game absolutely perfect for someone who really, really, really just wants to shoot something after a bad day at work. There’s not really any problematic content in the game, which is nice if you have kids.

If you’re looking for a game that offers intense skill trees and intricate stories, Void Slayer is definitely not the game for you. If, however, you find that you have a powerful desire to spend thirty or so minutes entirely focused on shooting something, then you could (and likely have done) do far worse than Void Slayer.