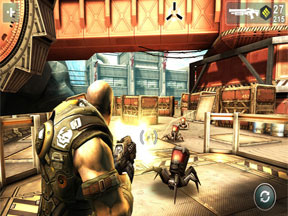 The story of Shadowgun is standard first-person-shooter (FPS) fare. John Slade, a professional bounty hunter or shadowgun, is hired to track down Dr. Edgar Simon a renowned geneticist. With the help of his android S.A.R.A. he goes after the doctor. Slade tracks Simon to an industrial facility and proceeds to try and get to him.

While the graphics are stunning for a mobile device, they’re fairly standard for a FPS, meaning lots of rusty barrels and shipping containers and concrete barriers randomly placed to provide cover.

There are interactive sites where you have to play simple memory games to access data and S.A.R.A.’s sexy voice is there to talk to John when he needs her.

The real innovation here is in the movement system. Rather than use your finger to point and click where you want to go, Shadowgun uses a duel thumb system. Your left thumb controls character movement, while your right thumb controls the camera angles. The controls do take some getting used to, however, once you’ve got them down the game moves very smoothly.

As levels progress, however, and the game gets harder, any drag on the screen can mess up your timing, so I strongly recommend starting with a clean screen every time you play. And you’re going to want to play, which is the other problem.

Shadowgun feels like a console game. It feels like the kind of game you want to play for a few hours at time, unfortunately, the iPad gets heavy after awhile and it’s not terribly ergonomic to hold it and maneuver your thumbs at the same time, so after about a half an hour, my wrists start to hurt.

Maybe that’s just me, but it’s something to consider if you have wrist or hand issues.

In short, there is not a lot of bad here and a great deal of good. FPS fans and iPad owners looking for serious games should go forth and purchase.