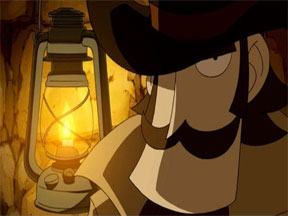 Doctor Lautrec and the
Forgotten Knights

Under normal circumstances, I’m not a huge puzzle game fan. Which is odd seeing as how I want to be a detective. So I was actually curious to see if Konami could put a story behind all the puzzles. The result is Doctor Lautrec and the Forgotten Knights.

The game starts out with a quick cut scene that shows the characters crawling through some old tunnel. Even though the camera started out in third person, during the cut scene it switched to first person once in awhile. Afterwards in went back to how dialog is normally displayed. For the majority of the game dialog is carried out much like the old style games where you see a picture of the character and the spoken text is on screen.

You follow Dr. Jean-Pierre Lautrec and his assistant Sophie. At first I thought it was going to be your average run of the mill puzzle game. In actuality this game has a riveting story that is on par with most role playing games. Once you’re through the tutorial mission, the main story kicks off when a young girl named Marie brings them an old artifact.

With her is a man named Vidocq, who seems just as interested in the item. After you put the item back together, Vidocq holds you at gunpoint. Using quick reflexes, our characters are able to escape. Now comes the question: what is so important about this piece?

After tracking down the location of the next clue, which leads down to a futuristic labyrinth, you encounter a strange group of people. Thus you continue on your way to solving this mystery of the century.

There are a few interesting things about this game. One of which is that to obtain treasure which is cursed, you have to counter it by using you own "tamed" treasure, which you do by fighting a battle. The battle system consists of dragging your treasure and placing them on pedestals. After you do so, there is a little animation that follows that’s kind of humorous. You’ll be doing it a lot.

Doctor Lautrec also has a boatload of side quests to go on to get stronger treasure. These quests involve all sorts of great riddles, and I feel smarter after playing this game. However, these quests do get redundant after awhile.

While the graphics are great and Doctor Lautrec is no doubt a fun game to all gamers; there is plenty to be desired. Outside the main quests, the side quests don’t do much for the story and grow tiresome. Each quest seems like the one before it, just a different riddle. Overall though, this game belongs on your to-get list. Because of the extremely high fun factor and engaging story, I give Doctor Lautrec and the Forgotten Knights an above average 4 out of 5 gin gems.