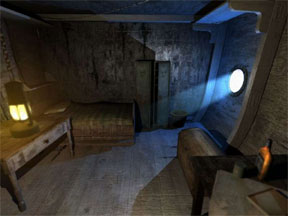 Penumbra Will Get Under Your Skin

I play a lot of scary games, but few games really scare me. Penumbra: Overture did however, and did it by using very unique techniques.

Penumbra actually started out as a technology demonstration. This exhibit of a game was designed to show off some new experimental techniques the developers thought would make a gamer become more immersed in the experience of playing. Apparently the demo was so successful everywhere it was shown, gamers demanded it be made into a full game. Penumbra: Overture is that game, and is the first in a planned series of three adventures.

The game puts you in the role of Philip, who, following the death of his mother, receives a letter from his dead father. The letter insists he burn a particular book kept in a safety deposit box, but Philip studies it instead. Following clues in the book, he is led to Greenland. This is all told in a non-interactive story mode. When you are finally given the reigns, you are inside a dingy ship’s cabin and have to gather up some supplies before heading out into the frozen wasteland to find your father’s legacy.

Here is where you get your first taste of how the game works. The game, like real life, is filled with objects like tables, chairs, doors and chests. A hand icon appears when you can move or manipulate something. But unlike most games where just right click to open a door, here you actually have to move things yourself. So to open a chest, you have to hold down the mouse button and push the top back. Doors open the same way. And you can slide some objects around as well, or stack them up to help you reach a higher area.

All this object manipulation is a little difficult at first, but over time it becomes second nature. In fact it is this extra effect that helps to draw you into the horror of the game. Having to actually grab a door and slowly nudge it open while peering at what is hiding inside in the gloom is quite an experience, even if all you find is empty crates and an abandoned office. You feel like you are there much more than in a standard game.

After you get off the ship you are stuck out in a blizzard and freezing to death. You do however find a strange metal hatch in the ground al la Lost style. If you pick up a rock and bash the ice all around the hatch, you can enter. Of course the ladder going down breaks and strands you in a strange compound, but at least you are out of the weather and in no danger of freeing to death. Though after a few minutes down there, you may wish that you opted to freeze.

The sound effects are the next element of the game that helps to pull you in. You will hear some odd sounds as you explore the mine-like military complex. And a lot of the sounds really mean something. Case in point, early in the game I entered a storage room with three doors. Behind the one on the right I could hear a skittering sound, almost like typing but moving across the floor. Behind the center door I could hear what sounded like a dog whimpering. Behind the left most door was only silence. Considering evidence I found suggested that the complex was abandoned long ago, like in the 1950’s, I did not think a dog would have survived that long by itself, or at all really given this is set in modern day. And I did not want to think what could be making the skittering sound. Instead I slowly opened the quiet door and was rewarded with finding a secret trap door hidden under some rocks. Going down there led to more adventures, though I did eventually go back and check out the other two doors. I can’t speak of what I found there. It was too horrific.

There are monsters in the game, which seems a bit odd considering you don’t have any real weapons. You find boxes of ammo but no guns. So this is not Half-life or Doom 3, though the fully 3D first person interface is similar. Games like that are good, but you always feel a bit safer when holding some serious firepower. Here you have to use your environment to save yourself.

Perhaps you can quickly pile up some crates in front of a door to keep something evil at bay, or if you find a propane tank, you might be able to rig up a trap that you can trigger from an overhead balcony. It’s kind of like MacGyver, only your life is on the line every time. You can also hit monsters by swinging tools at them, but in my experience, that is the recipe for a quick death. Instead, use your environment to your advantage.

Slowly you start to learn what happened at the facility, but you are only given this info in small bits and pieces, which also lends to the atmosphere of suspense because you are never quite sure exactly what is going on. And right from the start, there are hints that you may have to die to make things in the world right. The evil of that facility has been imprisoned for a long time, but may not stay bottled up forever.

There is also a sneak interface, much like what you find in the Thief series. Basically as long as you are standing still and in a dark area, you are pretty safe from detection. But kneel down too close to a light source, or move too quickly while something is watching, and they will be on you quicker than an undead dog chasing after some rotten beef jerky, which trust me, is pretty darn fast.

The graphics for Penumbra (the word means the part of a shadow where there is still a little bit of light – very much like the facility you are exploring) are a touch dated, though not by any means bad. They would be considered cutting edge perhaps a few years ago. Given the amazing atmospheric conditions you find in the game, and the fact that things are pretty dark, you won’t really notice.

Other than a few little jumps while playing Doom 3, it has been a very long time since a game has really scared me. In fact, to go that far back requires zooming into the past all the way back to Realms of the Haunting, which came out in 1997. This game and Realms could be considered kindred spirits. So it has been quite a while since those days when you played games with the lights on for fear of the dark.

Using new techniques, Penumbra pulls you into its dark web very effectively and will scare the heck out of you. And given that it is only $20 and can be had almost instantly as a digital download, missing this fine example of fear and fun would really be scary.

Just click on the Penumbra banner above and you can start your journey, though don’t do so unless you really think you can handle the fright. You have been warned.