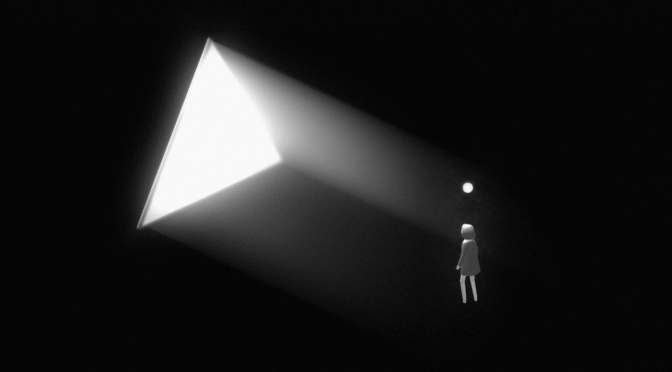 It’s good being the puzzle guy around here. Because most of the good puzzle games, the ones with story and atmosphere, land on my desk. Fracter is definitely one of these. Possibly the best example of one of these in a long, long time.

The premise of Fracter is one of those “cold open” types that leaves more questions than answers. Your character starts on a disc-shaped platform with seven obelisks circling the perimeter. How did she get there? Who the heck is she? It doesn’t matter, just sit tight and listen to the eerie music, go get your light orb, and look at yourself in the mirror.

Of course, when you do the only thing the game allows you to do, that’s when the objective makes itself apparent. A whole bunch of light silhouettes of your character split off and go into the seven pillars. Now you have to go through the door inside each one and fetch those parts of you, while trying to solve the level so you can get out again.

Since this started out as a mobile game, the best way to interface would be with a joystick. Since most puzzle game don’t require one, I don’t have a joystick, so had to make do with the old ASDW to make the character move. Of course, this means I have to press two keys simultaneously to go diagonally, which you need to do a lot, since the levels are oblique to you. Fortunately, you can’t fall off of the pathways, which do get narrow and twisty at times. The puzzles are entirely point-and-click with the mouse, but there are times between them when you have to move around monsters, and hitting the wrong key will restart to at the last autosave point.

The puzzles are well-thought-out and in some places quite devious. They use light, reflection, rotation, platform levels, and sometimes huge blocks to push around. As you go through the later levels, these elements are interwoven in new ways, which keeps you on your toes.

While your immediate goal is to solve the level so you can exit and go through the next door, you have a more long-term objective. There are 25 light shards of your character scattered throughout the game, and to get the optimal ending, you need to find and rescue each one. Often they are on a side passage that you may miss because of the dim lighting. Sometimes they are running around and you need to be in the right place to intercept them. Rarely they are in a puzzle area, and you need to solve it in a different way to retrieve it before moving on.

When you get through the seventh level, if you are short some shards, it will give you a shadowy poem and show you which ones you missed. Then you have the opportunity to replay those levels, and, once you got them all you must redo Level 7 and re-get the shards there before you can end the game with the light poem on the screen.

I have to say, although I got frustrated at times by the lighting, the stark black-and-white graphics are really quite stunning. The music is immersive, and I found it to be a comfort at times, and creepy at other times. The sound effects are just enough to put you on edge when a shadow spiders out and chases you, and give commanding tones when you redirect a puzzle component.

I guess my major complaint about Fracter is that it’s too short! At the end I just wanted more. But, really, it was a solid 2.5 hours of gameplay, and for the price Steam is asking, that is pretty good bang for the buck.