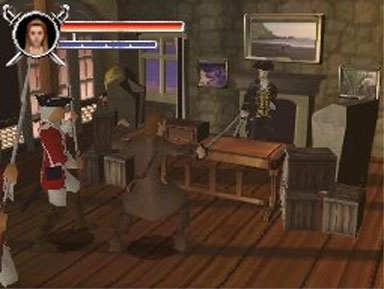 Well, it looks like ole’ Jack Sparrow, Captain Jack to most, has found himself in yet another ill-fortuned plot of foul play and deceit. It turns out that Jack owes a blood debt to the legendary Davy Smith, "Ruler of the Ocean Depths," who also captains the ghostly "Flying Dutchman." Unless the ever-crafty and beloved Jack figures a cunning way out of this "Faustian pact," then he will be cursed to an afterlife of eternal servitude and damnation.

Fortunately for him he doesn’t have to face this enigma alone. With the help of his friends Will Turner – private weapons Smith and expert swordsman – and his bride to be, Elizabeth Swann, Jack will have to pull off a daring feat of danger, wits, deception, swordplay, and just a little harmless piracy here and there to help unravel this tangled web of supernatural intrigue. So find yourself an ore and make your bloody self useful as we take this venture to a new platform, "Pirates of the Caribbean: Dead Man’s Chest," now playing on the Nintendo DS.

At the start of the game, we find our beloved pirate in one of his frequent and familiar surroundings: …a jail cell. Being held against his will by a small band of nomad pirates on some ill-forsaken island, Jack cleverly picks the lock of his cell with practiced ease and is then forced to fight his way off the cursed rock. Of course, if you haven’t figured it out by now, though Jack always finds himself in the most disadvantageous predicaments, it’s the pirate in his blood that always allows him to make the most of the situation. Consistently known for putting his personal agenda before first priorities, Cap’n Jack is not about to leave the place without some sort of treasure in one form or another.

In this case, there is a key, or more accurately a "drawing" of a key, in particular that has caught his eye. It’s no secret that in this line of work you’ll never find a key without a pirate nearby and vice versa but, more importantly, where there are pirates AND keys there’s usually treasure and that’s what Jack’s betting on.

During Jack’s daring escape from the prison players will get a chance to learn the basic control scheme of the game. Some of Jack’s "pirate heroics" include picking up and throwing objects such as bottles, crates, explosive barrels and the sorts at enemies’ heads to stun them momentarily. That brief moment of surprise is time enough for Jack to put his sword to good use. You can execute a small arsenal of combos initially during the game to best enemy foes by trying different combinations of swordsplay tactics and kicks. As you progress through the game, you’ll unlock even more powerful combo attacks that you’ll need in your arsenal to work your way through the Carribean.

During those moments when Jack finds himself overwhelmed by enemies he can pull off a powerful "Savvy attack" to quickly disperse multiple enemies. He can also block the attacks of his aggressors with his sword and when he’s caught in a bad position he can swiftly roll himself in multiple directions to evade eminent danger. Besides "Basic Pirate 101," Jack can interact with various objects in his environment to wiggle his way out of distress. Some of his actions include firing cannons, using torches to burn his way through obstacles, and even kicking down shallow walls to expose hidden paths.

The sword is Jacks main default weapon of the game. It never leaves his side. However, players can pick up other "temporary" weapons such as axes, cleavers, maces, spears, bones, and even guns to get the job done for shortened periods of time before they vanish into thin air. Surprisingly the temporary weapons concept of the game works fairly well with the action as players learn to make the most of these frequent opportunities. Temp weapons drop off random enemies and/or become revealed in busted crates frequently so most of the times when your weapon disappears there’s usually something else around to grab and finish the job with.

Among other dropped items players can collect "power-ups" to help aid Sparrow along the way. "Red Grog" potions replenish health when it gets too low while "Blue Grog" potions replenish Jack’s "Savvy bar" so that he can call on devastating attacks later on. Various amounts of "gold" can be found in random containers. Money always comes in handy for unlocking new functions of gameplay and various tidbits of concept art. It’s also good to keep an eye out for "Health Chests" which also help to extend Jack’s survival. Once you’ve beaten the final boss in a location, you can replay that location and search for the location’s hidden "character statue" which will unlock an enemy from that area as a playable character.

Once you finally manage to spring Jack from prison, he returns back to his ship with the key and thankfully in one piece, but only just in time to be visited by a former ghostly acquaintance reminding him of the cursed oath he took some years back. From here the game changes directions for the next couple of levels as the plot catches up with Will Turner and Elizabeth Swann who seem to be having a few troubles of their own. Just as Will and Elizabeth are about to take their vows and become "Mr. and Mrs." they’re little honeymoon gets broken up by the infamous "Captain of the Guard" who arrests them for aiding and embedding a known fugitive upon which the penalty is death. They both get dragged off to jail. However Elizabeth, whose father holds quite a bit of noble stature around the area conspires with a few loyal guards to free her from her cell so that she can escape to the open seas.

Of course Elizabeth has no intentions of leaving without her man whose still behind bars awaiting execution, thus sparking a new venture where players can get to learn her "not-so-feminine" side and her superior way with a sword.

So time goes by, blah, blah, blah, and of course Will is freed from prison as well and then the couple decides to head out into the Caribbean to find and warn Jack in advance of what’s in store for him down the road and players will then have a chance to demonstrate the expert sword skills of the handy Will Turner.

However, this is the part where after an hour or so of gameplay goes by that the reality of things starts to hit you right smack in the face. You’ve now advanced three stages into the game and you’ve seen more "hacking, slashing, container bashing, and skull thrashing" than you can shake a peg leg at. You probably also will have noticed that you’ve spent quite a bit of time in completing these few stages which were, honestly, quite lengthy and a bit dragged out. To make matters worse, you’ve probably spent thousands of gold pieces on "meaningless" concept art which isn’t all that rewarding a treasure in itself and barely unlocked only a handful of new combos.

Well, you see, this is the part where I’m supposed to tell you not to worry because things get better down the road. However, unfortunately for us my friends things don’t get better. In fact, I can assure you that there are twice as many more hours of mindless hacking and slashing adventures and quite a bit more of meaningless concept art out there waiting for wayward and venturous players like ourselves.

What I’m saying is that P.O.C: Dead Man’s Chest is a game that never evolves into anything more than a hack and slash adventure. Aside from a select arsenal of cool combos, a pretty decent story plot with a few noticeable holes in it (much like the movie it is based on), an occasional mini-game throughout the adventure to throw off the monotony of things, and some pretty lousy concept art, the harsh reality of the matter is that this game doesn’t really have much to offer players in the long run. Sorry Captain Jack. You’re one of my favorite heroes of the big-screen, and you’re a clever ole’ chap at that, but this is one predicament you’re not going to wiggle your way out of.

The bottom line? Visually the game looks pretty respectable, especially for a DS title. The action gets off to a pretty good start and earlier on there is some fun and a sense of accomplishment to be had. However, because the game never really evolves into anything more than a hack and slash event, the fun rapidly begins to take a turn for the worse. There are a few cool combos and hidden characters to be unlocked which add some spark to the gameplay for a while, but still the situation is what it is: Thumbs up for the movie and a weak outing for a game that in my very own pirate eyes is only worth a weak 3 1/2 GiN gems.