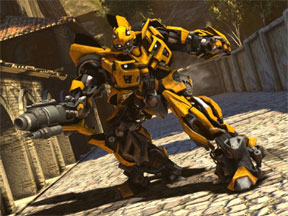 Transformers: Dark of the Moon

Transformers blast back into the game market with the fourth installment of their series, Dark of the Moon. Players rejoin the Decepticon and Autobot war in this action packed game stretching from Mayan ruins to a secret cryofacility in Russia.

Players even get teased with the idea that the Mayans existence was in honor of the Decepticons when they visit Mayan ruins that are littered with Decepticon hieroglyphs.

The Autobots must figure out what the Decepticons have planned next in their attempt to take over Earth and all its resources as they also try to figure out what Megatron is plotting. Players will take control of Decepticons for three missions where they are introduced to their plan, but they complete the game with Optimus Prime. The game does include its humorous moments especially when Megatron reminisces about being frozen in an American facility in the sixth chapter of the game.

Players get a full array of characters to play in this game. In fact, you get to experience the skill sets of popular Transformers such as Bumblebee, Ironhide, Mirage, Soundwave, Starscream, Megatron and Optimus Prime.

Now, don’t worry about any similarities to War for Cybertron because players will not have to pick a side in the war. The creators mixed in playing missions for both sides of the spectrum, possibly to leave it open for more games. The biggest issue with the characters is that Optimus plays such a tiny roll in this game. Other than hearing him a few times and fighting a boss with him in the final chapter, he is pretty much absent.

The gameplay is extremely smooth as people play through the game in the many forms of the Transformers. Players get to experience the characters through their stealth driving form, equipped with two weapons, the quick automobile form with a speed burst and of course the amazing transformed aspect.

Each character has a different set of weapons, abilities and melee attacks for the players to enjoy. They range from Bumblebees launchers to Mirage’s sniper rifle and the amazingly fun life drain of Megatron. There is a something for every player when it comes to the hardcore Transformers fan.

There are seven missions that the players will complete during this game. Total gameplay is right around twelve hours, but one issue with the setup was the large discrepancies in the mission lengths. Players only get to control Optimus Prime for about twenty minutes versus thirty minutes of Soundwave. The creators could have focused a bit more on balancing the missions, but the focus on the other Transformers may have been their point the whole time. It could be the idea to bring lesser known Transformers to the forefront of the war by looking past Optimus and Megatron.

Now, you can’t check out an X-Box 360 game without checking out the achievements, because in every 360 player there is an achievement junkie hiding waiting to get out. This game has 36 achievements worth the standard 1,000 gamer score. The achievements are extremely easy to manage in a single play through with a small amount of mop up at the end. It is even simpler because after completing the game players can select chapters and specific load points in the chapter to make a run for achievement perfection.

Whether you are the diehard Transformer fan or you are just curious about the game it is well worth the look. The gameplay is extremely smooth and the story was well thought out, which is a rarity in movie games because most times one destroys the other. Sean Miller did a great job pacing this game, and this could be a hidden gem in the game world. Players will get a large fill of Transformers and stuff blowing up in this Transformers installment.