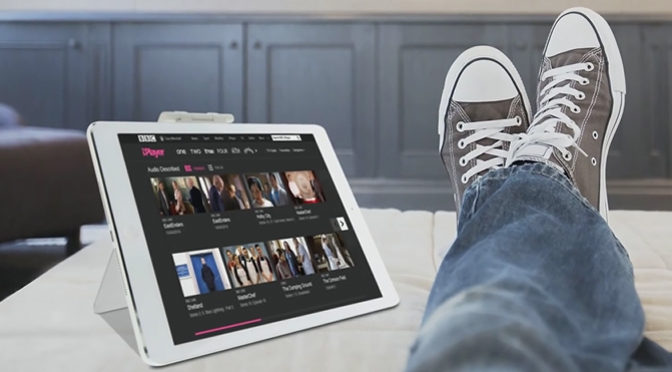 When I received the Filofax eniTAB360 for review, I wasn’t sure how useful I would find it. I didn’t have a device to prop up my tablet, and hadn’t missed it, so I didn’t expect think much of it. It’s a deceptively simple device. It’s a lightweight bit of plastic with a sticky disk that sticks to the back of any tablet. Once attached it can be rotated so the tablet can be propped up at any angle in the landscape or portrait position or the eniTAB360 can be flattened to make it easy to fit your tablet in a tote or purse.

I was most skeptical about the sticky disk. According to the instructions it can be attached and removed without harming the table and reused by simply rinsing it and letting it dry before attaching it again. I have a new iPad, but I still have my iPad 2, so I decided to start with the old one. I figured if the sticky disk left a mark, I’d rather it do that on my old iPad. My old iPad is also a lot heavier than the new one, so I thought it would be a better test anyway. I got out the eniTAB360, took the protective cover off the sticky disk and stuck it on my old iPad. Then I propped it up and left it on my kitchen table for two days.

Throughout the day I would look up various and sundry things on the iPad. I’d change its position and poke at it. The eniTAB360 stayed in place and worked like a charm. After a couple of days, I removed it, which was simple enough with the plastic card provided, but any credit card sized plastic card would do. It didn’t leave a mark on the iPad and came off with just a little effort. I rinsed the disk, let it dry, reattached it to a different end of the iPad and started the whole test over for another two days. Removal was just as easy the second time. 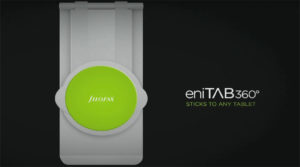 What is it good for? Personally, I love it in the kitchen. I pull up a recipe on Pinterest and it’s easy to reference with my iPad propped up like that. I’m not a big fan of video chat, I always remove Facetime from my devices, but I know people who love it and I can see the eniTAB360 being very useful for that, especially if you want to knit or cook or whatever while you’re talking. Obviously, it’s nice for watching a movie while you’re doing something else too. Basically, this is a great little gizmo. It doesn’t weigh much and it’s easy to take off if for some reason you don’t want it on your tablet anymore. It comes in two sizes so it doesn’t matter what size tablet you have.

[amazon asin=B072K39QWL&text=Pick up your own Filofax Tablet Assistant from Amazon!]

Really, my only concern was for the life of the sticky disk over repeated uses and I only say this because it does have a tendency to roll up a bit on the edges when you use the card to remove it. I did have a lot of success with pressing it back into place with my thumb, but it’s not as pretty as when it’s new out of the package, but it does go back into place.

I highly recommend the eniTAB360. I didn’t realize how useful it would be until I got it, but now I use it all the time. Check it out for yourself!