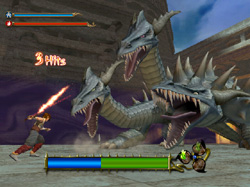 Dragon Blade: Wrath of Fire is the story of a world overrun with evil. This evil is brought about by the greed of man and dragon. These two apparently lived in peace at one point, but were led astray by an evil dragon Vormanax. Thankfully one dragon, Valthorian, stayed true to heart, and again thankfully he finds a descendent of one of the good kings who has a chance to save the world. That man is you, Dal, a simple farmer with a hot fiancÃƒÂ©e and no worries. That is, until your hot fiancÃƒÂ©e is killed by the bad guys. After a sad cut scene of you holding your dead but still hot fiancÃƒÂ©e in front of your burning house, you set of on a path of vengeance/salvation for mankind.

You are given the handle of a sword with a blade of fire and you are on your way to collect the other pieces which are scattered across the land. The gameplay is as simple as it comes; hack and slash all the way through, which for the Wii means exhaustive swinging and stabbing while you run through swarms of enemies.

All the moves are established by moving the wiimote in the desired direction, with blocking done through the A button and jumping with B. Getting Dal to do what you want him to plays pretty consistent, with the occasional misdirection, but the accuracy is strong enough to remove any frustration that has come with several previous Wii titles.

The bad guys consist of your average array of goons including wolves, bats, lizard guys, hog guys, wizards, etc. You work your way through five different worlds, which are the standard elemental arenas (water, fire, earth, wind) that look alright, but not great. This is some of the better graphics seen on the Wii so far, but that still means it could also easily be found on the PS2 a few years ago.

The most aggravating thing about the levels is how constricted they are. Roaming off the beaten path is never allowed, reducing exploration to forward or backwards. Most of the levels have you climbing up cliffs or castles and you can’t even fall off the edge. Really the only thing you have to worry about doing is beating down bad guys.

Each world consists of two levels to run through, with a third which finds a King boss at the end. Each of these kings has part of the dragon blade which has transformed them into a monster.

These bosses are fun and pretty tough, but you are only given a few chances before you have to play through the entire level again, which can be excruciating when you have to beat through a bunch of goons to get back to the king.

Once a king is defeated you gain his power, first being dragon arms, then wings, a tail, and finally a head. You can summon these powers using the D-pad, with use being restricted to your fire power meter, which is replenished by jewels found by performing certain sword moves like the thrust, and by beating up random objects placeed through the levels. These dragon powers, mostly the dragon arms, are essential to the following level, which is a dragon boss.

Each of the dragon bosses has its own level, which is comprised of three parts. The first two parts require you targeting a part of the dragon while avoiding various moves, and the third, called the core break attack, requires a series of buttons and wiimote swings, to destroy the dragon.

The boss battles are by far the best part of the game, but they can drag on since each boss only has two or three moves to figure out how to avoid while you slowly chip away at their life.

The game is overall very short, which is more of a good thing than bad. You can beat it in a dedicated five hours, so long as you can get through the king bosses without having to replay through the entire level.

Seeing as the game really is too dedicated to beating down loads of bad guys, it’s nice getting through it quickly. Once it’s over, it’s over- there isn’t any replay value with this one, unless you’re OCD and have to go get every armor jewel.

Since the game really isn’t bad, just completely average, this makes it worth at least a rental. And as a bonus at least you can get your weeks worth of gamer workout out of it. By the time you are finished chopping and hacking, you are going to be pretty tired.