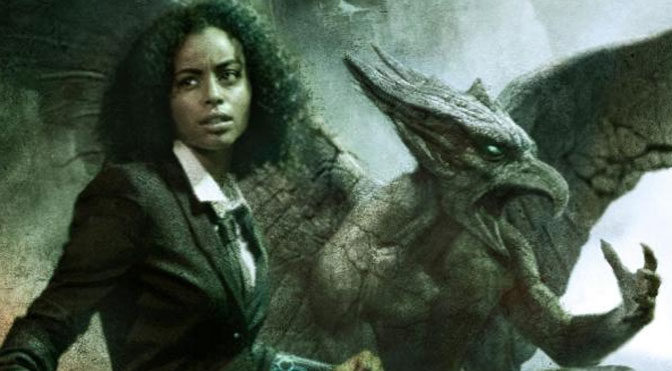 Plot Synopsis: The great city of Alt Coulumb is in crisis. The moon goddess Seril, long thought dead, is back–and the people of Alt Coulumb aren’t happy. Protests rock the city, and Kos Everburning’s creditors attempt a hostile takeover of the fire god’s church. Tara Abernathy, the god’s in-house Craftswoman, must defend the church against the world’s fiercest necromantic firm–and against her old classmate, a rising star in the Craftwork world. 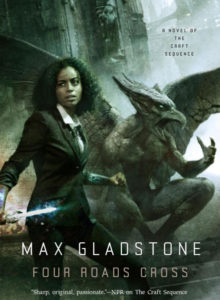 Plot: The plot in Four Roads Cross is intense from the start of the book till the very end, and continues the Law and Order with Magic theme with gusto. I think Four Roads Cross is my favorite entry in the series thus far, and not just because it seems to be a culmination of all the previous books I’ve reviewed. That is a big help though, and I enjoy seeing things from all the previous books start to come together.

Characters: We get introduced to a few new characters, but mostly we get to see some familiar faces from Three Parts Dead. Of the newcomers I enjoy Ellen and Claire the most. Not just because they are both sisters, but because of how they grow over the course of the book.

That isn’t to say our main star Tara isn’t growing over the book, she turned down her job offer to work with Elayne at the end of Three Parts Dead and is having to accept that she isn’t the same as she was when she first arrived in Alt Columb. We also get to see some familiar faces from every other book in the series as well, but I’ll leave the who and why for you to find out.