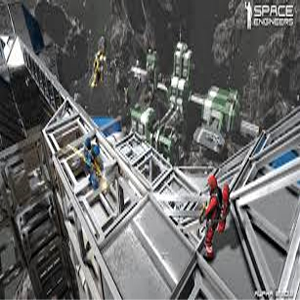 Independent developer Keen Software House is proud to announce that their highly acclaimed space-based sandbox game, Space Engineers,  has sold over 1,000,000 copies.  The game was released in October 2013 on Steam Early Access and is celebrating this important milestone alongside its first year anniversary.

“We feel twice as happy with this achievement since it came on our first year anniversary since Space Engineers was launched to the public. This gives us double reasons to celebrate” said Marek Rosa, CEO and Founder of Keen Software House. “We want to devote this accomplishment to our fans, whose encouragement and active participation made this possible. They have been beside us all along, giving inspiration for new ideas and supporting us with their valuable feedback. It is a great thing to have such an amazing community like ours!”

Space Engineers, one year after it was released on Steam Early Access, has captured the attention of PC gamers around the world. Voted by the players as one of the best Indie games of 2013 (IndieDB Game of The Year Awards) and featuring an incredibly passionate fan base, Space Engineers has become one of the most popular Early Access games on Steam.

Looking to the future, Space Engineers will remain in development for a while longer, focusing on adding new features and bug fixing and also continue taking feedback and suggestions from the community who is helping to further improve and expand the game. Space Engineers is already counting over 50 new updates which are added on a weekly basis, including the recent implementation of the Modding API and the Dedicated Servers.