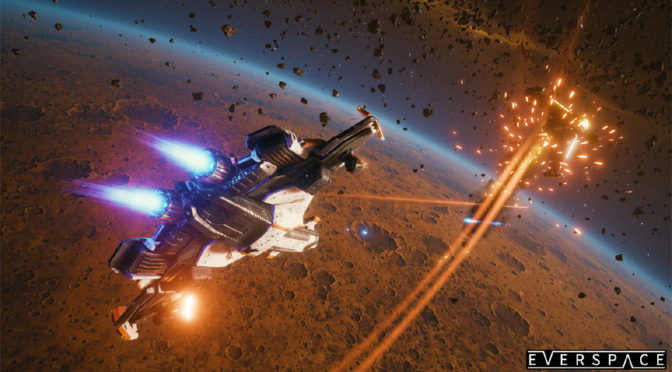 Hamburg-based independent developer ROCKFISH Games today released the critically-acclaimed expansion (97% positive reviews on Steam) EVERSPACE – Encounters on Xbox One and Microsoft Store for $9.99 / €9.99 / £7.99. The major expansion adds over 10 hours of extra gameplay to the base game.

EVERSPACE – Encounters provides access to a new fighter class ship called the Colonial Sentinel, packed with a lethal loadout of new weaponry offering a fresh and distinctive play-style. Space pilots will also have a wealth of devices and consumables at their disposal, including a special shield, featuring twice as much capacity as the standard model.

The Colonial Sentinel is a formidable new ship capable of deep space interdiction and exploration providing pilots with the confidence to even take the fight to multiple adversaries simultaneously: It is armed to the teeth with an array of sophisticated electronic warfare weaponry, like an EMP Generator to disable any electronic systems within a certain area, a powerful Lightning Gun dealing damage to several targets at close range as well as a Seeker Missile Battery for launching a fiery barrage at multiple foes all at once. Add to that a Plasma Thrower which propels white-hot death as a spurt of plasma onto enemy craft and the Neutron Cannon which devastates enemies with increasing area damage and bigger projectiles the longer it is charged.

But, there is much more than new ways to defeat enemies: The introduction of all-new factory space stations in the Encounters expansion also offers up the ability for pilots to refine and convert resources, upgrade ship capabilities or carry out minor repair jobs from damage sustained in combat.

Furthermore, players can now encounter new types of enemies and new story characters, who will offer individual questlines thanks to the roguelike game loop. All pilots will run into them sooner or later, without having to finish the main story first. Those who have already beat the game, now have a whole new incentive to get back into the game as they explore new possibilities and unveil further secrets in the galaxy. Daring space pilots can even venture to the Okkar Homeworld to face yet another challenge and collect special rewards.

“We know that are our fans on Xbox have been waiting for this release for a long time, which is why we’re thrilled to launch Encounters on Xbox One, today. Of course, we are still supporting Play Anywhere, so Everspace pilots can delve into even more fast-paced space action and content to explore as well as new deep space encounters to experience on both platforms without paying twice,” says Michael Schade, CEO of ROCKFISH Games.