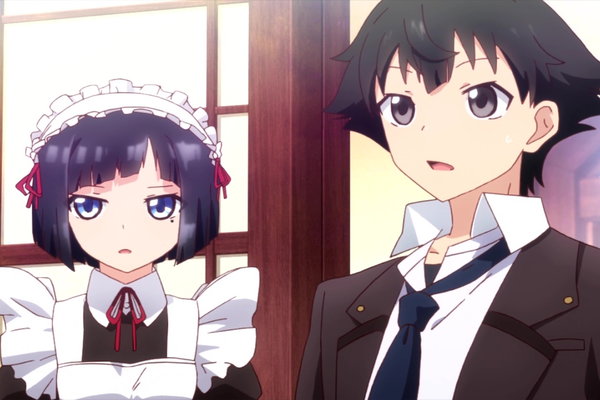 This week I’m back with a series I could barely watch through the entire episode for Anime Sunday. It’s Shomin Sample Episode 01 Impressions!

Plot Synopsis: Kimito Kagurazaka is an ordinary high school student. One day, he is forcefully enrolled in All-Girls School Seikain where its noble female students are cut off from the rest of the world to preserve their innocence. However, this deep isolation leaves a large number of school graduates unable to cope with the outside world. To deal with this problem, the school has decided to kidnap a male commoner, Kimito, hoping that his “common man’s” influence will be a gentle way to introduce the girls to the realities of life outside. Unfortunately for Kimito, the school only considered him a candidate for this project because they thought that he was a homosexual with a muscle fetish, and therefore no threat to the innocent girls’ chastity.

Plot: What I thought was going to be at least amusing was painful to watch, while the first 8 minutes were funny, the actual first meeting with a class was so painful I nearly stopped watching. It didn’t get much better as the episode went on, so I’m probably not going to keep watching the series, unless I get really bored.

Art: It fit the series to a T and that’s all I can say that was positive about it. It wasn’t Studio Deen bad, but it wasn’t far off.

Music: Like the art it was decent, and that’s about it.

Overall: Skip this unless you are really starving for a Romantic Comedy series.

For those who like: Romance, Comedy, Ridiculous Plot Hooks, Decent Art and Musical Score.

Not for those who don’t like: Any of the above, or cringe-worthy cast of characters.