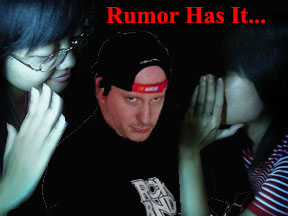 And to think, just up to a few minutes ago I was suffering from a strong case of block. However I just got hit with a lot of rumors that need to be addressed. One of the biggest ones I received came from Activision saying that Guitar Hero IV (the one coming out after GH: AeroSmith) will actually feature the use of additional instruments as well as offering local bands.

This concerns me. I thought this game series was GUITAR Hero, not BAND Hero? Why does Activision need to add extra instruments to the mix? Their series was always based on playing the guitar, nothing else. But now it seems they want to go the way of Rock Band. I didn't really think Guitar Hero's sales were hurting that bad to warrant such an act of desperation. Why fix what isn't broke?

Of course, there is something else on everyone's mind this week, and in particular next Monday night, as tons of impatient gamers, myself included, will be waiting in line for the second coming of the Apocalypse called Grand Theft Auto IV.

I will even be there covering the event LIVE to be broadcast on GamerGeeks, the exact moment I get my GTA IV Limited Edition on 360, or whether the retailer will find some way, somehow, to screw me over.

However this time it will all be recorded, so if I was that store I preordered from that shall be left nameless for now, you'd might want to be prepared.

Originally I had no true interest in GTA IV because I have to admit the trailers did not captivate me at all. Delaying the game from the planned October 16th original release date also pushed me away. But now reviews are coming in and surprisingly they were quite high.

Of course, Gamespot's review will be disregarded, but we know if it gets a low score, whoever writes it will get fired. I'd rather get their review right from Jeff Gerstmann's newest blog!

Even with the April 29th release date, both NTSC and PAL versions have been leaked over the net. And just a few hours ago, I was actually watching streaming footage of GTA IV!

And while I was doing the best to avoid seeing any spoilers, I couldn't help turn away. It peaked my interest even more, and I do thank the streamer for cutting it off and replacing it with replays from Dead of Alive 4 so I would not see too much of the game before its release date.

I should mention a release date that was almost broken for real, and to me that is the most critical rumor. Reports came of two letters that were "printed" by Take 2 staff claiming that due to the piracy issues, the launch for GTA IV was released today, the 25th!

However after doing a little investigation, in this case calling local stores and contacting Take 2 themselves, the letters were been found to be a complete fake.

And if that was compromised, what would happen to next week's special GamerGeeks podcast?