Stop it, just stop it! It terrifies us here at GiN that this week’s comic just might be prescient. Can there really be a MLP game…with NINJAS? This week the gang from GameCo continues trying to figure out the bosses head. It’s a cold, dark, scart and surreal place to be. Brr! On the Sunday Comic! Man, Disney is going to get us for SURE with this one. The GiN Sunday Comic gang is trying to figure out the next great game tie in! Read it and get your bumpershoot out! 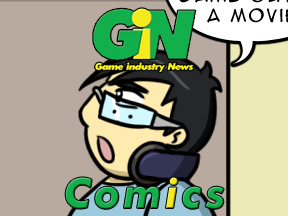 Trying to cash in is never an easy task. And it’s harder when you’re the boss at GameCo and unplugged. He’s heard that movies and games are big and wants it…in the comic! The team is working fine at GameCo this week. You can tell that productivity is up and morale is high. But what’s the boss up to? He’s thinking… It’s not a pretty sight with Joe and Jordan at daggers drawn. But it’s really Aster everyone should be worried about. Heads up, boys. Heads up. 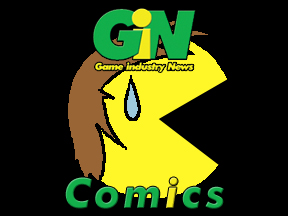 And it’s once more into the classic gaming breach as we further define the relationship in the Sunday Comic. Poor Jordan. Poor, poor Jordan. 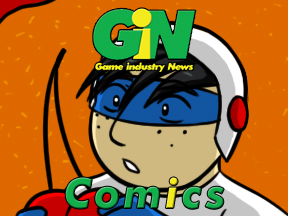 Aster continues her habit of torturing the boys in this week’s Sunday Comic! Isn’t that what nerdy girls get to do to nerdy boys? It’s like, a law or something. This time the GiN Comic takes the gang into the old school. It’s Aster’s turn to shine and take it out on the boys. Not that it isn’t that way all the time. Yes, folks, this week we’re drawing from real life for the comic. Guess which one of the GiN staff did this one? Hint: he signs the paychecks.