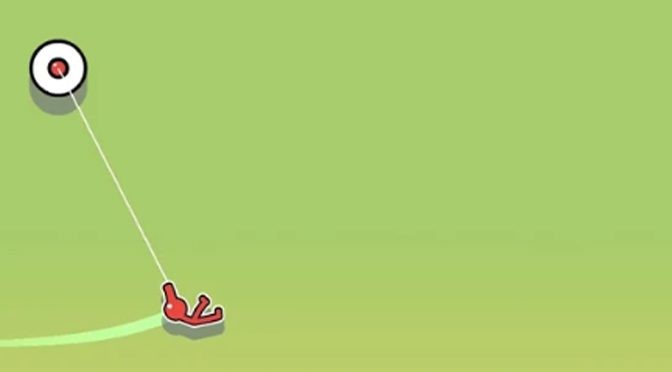 My time wasting this week was originally going to be another browser game. However, nothing was wanting to load properly for me. In my frustration, my mobile device became my go to this week for wasting time, and my game of choice is Stickman Hook.

Stickman Hook is a game with a simple concept. The player controls a stickman as they use a grappling hook to traverse various levels. This isn’t a new idea and I’m sure I’ve reviewed games like this in the past, but I’m unable to remember the exact names. Either way, it’s almost always a game type I find entertaining.

So what exactly is there worth noting about Stickman Hook? For starters, the game has an interesting physics system. Grappling around feels about right, but it’s hitting the various bumpers in the game that will cause players to notice a difference. These bumpers actually continuously increase the player’s momentum. I was expecting something than just alters the direction of my momentum, but this works much better for keeping the game going.

The other major thing worth noting about Stickman Hook is the lack of control the player has. They can’t just grapple to whatever they chose. Instead, the game has certain grapple points. Players also can’t choose which of these points to grapple. That’s a bit frustrating. There were times while I was playing that I would be right next to one point, but grapple the one behind me instead. This completely messes up the flow of the game and needs a fix.

I’ve also got another complaint about Stickman Hook. After about 30 levels, I started to notice that some of the “new” levels were actually just previous ones. The game mixes up the background color, but the rest of the level is just a repeat. I don’t think this is true for all levels, but it is at least for some. Yet again, that’s a really bummer as it takes away from the challenge a player should get from new levels.

Another negative on Stickman Hook is the sheer amount of ads it hits the player with. I’m starting to become more tolerant of ads in mobile games, but dang if this game just isn’t filled to the brim with them. Ads between levels, ads between death, forced video ads, game demo ads. It’s just got all of them and I hate it.

The graphics of Stickman Hook aren’t all that amazing. The game looks fine enough, but is about as simple as it gets. That includes just color gradients for background. I guess at least there’s a good bit of animation for our stickman when completing a level.

Now we move on to the final negative of Stickman Hook: the audio. The biggest problem here is that there just isn’t any. No sound effects. No music. Nothing. I guess at least I can’t complain about the audio being annoying, right?

Overall, Stickman Hook is a game that’s easy to pass on. It’s core gameplay is good enough, but the horrendous amounts of ads, no audio and just general lack of care for the product makes it hard to recommend.