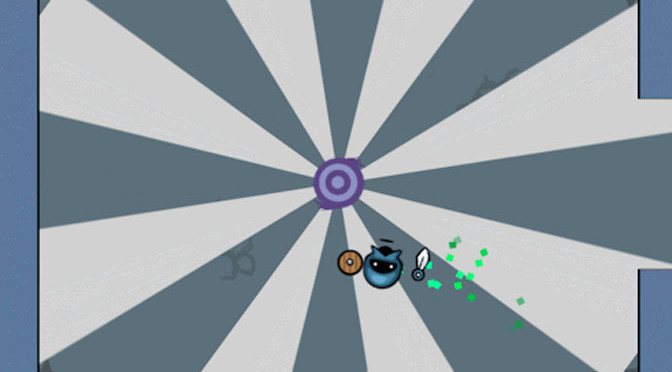 This week I searched around until I discovered a game in development called Shiny Gauntlet. The protagonist of the game is a spirit that is trying to escape a dungeon.

Shiny Gauntlet is an indie game that has rouge-like elements to it. The game drops players in a randomly-generated, unlit dungeon and has them run around as different classes killing monsters and collecting loot until they reach the end.

What makes Shiny Gauntlet a little different from other rougelike games is that players don’t permanently have a class. Instead, the player’s class is affected by what weapon they carry. Weapons have durability and different ones can be picked up to change your class while playing. Players can also carry two different weapons at a time.

The early version of Shiny Gauntlet that I played had five classes. These classes were Archer, Mage, Warrior, Priest and Thief. Each of the classes have an active and passive ability that help them stand out from the others. There’s also the base class that players start out as, but it’s mostly useless. The classes aren’t very balanced and some are obviously more powerful than others. A perfect example of this is the Archer, which has range and an active ability that lights up a room and can deal massive damage to enemies.

There is also a feature that allows players to fuse classes together to create new classes. It’s a unique twist that brings extra gameplay to the game with what are basically super powered classes.

While some abilities could do with balancing in Shiny Gauntlet, there are also problem with the hit boxes. The Warrior has it really bad as his attack will drag him into an enemy and easily get him hit. Sometimes the attack doesn’t even hit the enemy and he just takes damage. There are a few other problems like this in the game that I hope will be worked out before it gets a final release.

The graphics in Shiny Gauntlet are a bit generic, but that could just be because of the early state of the game. The character is basically just a black head that has floating clothes and weapons around it. Environments don’t have much details, but that probably has to do with the darkness in the game, which makes sense for a dungeon crawler.

The audio in Shiny Gauntlet is simple. There are adequate sound effects for actions and reactions. The music is alright for what it is and it’s likely there will be more on the way.

Overall, Shiny Gauntlet is an interesting idea and could be a solid entry in the rougelike genre. It isn’t likely to be full of innovation, but it might just be perfect for wasting some time on. However, it’ll have competition as rougelike games like Chasm and Vagante, the latter of which has an Early Access version on Steam, look to be released in 2015.

Shiny Gauntlet won’t get a score due to its pre-release status and will instead get a placeholder of 2.5 Gin Gems out of 5!