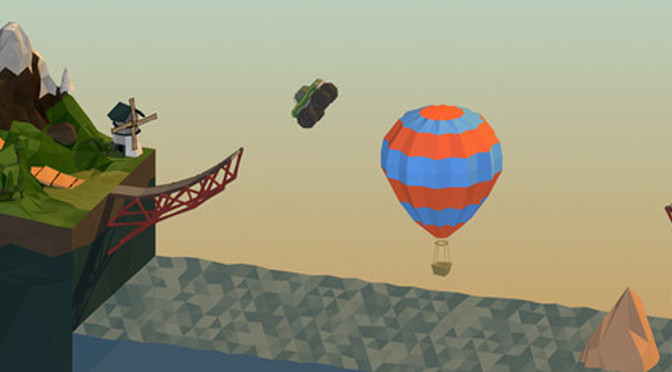 This week I’m here to talk to you about a neat little game called Poly Bridge!

Poly Bridge is a game that requires players to test their minds while building bridges for various types of vehicles to cross over. It’s currently in Early Access on Steam and it seems solid at its current stage.

The bridge building genre of puzzle/simulation games is one that doesn’t often get much attention. I’ve played a few of them over the years and have found them to be quite enjoyable. However, these were games I could play in my browser. I’ve never played one that tried to take it further with a full release on a service like Steam.

Poly Bridge put to rest my worries that the game was going to be just the same as other bridge builder I’ve played real quick. I was afraid it would just have a new coat of paint, which it does, and nothing else. Instead, the game offers a variety of tools to build bridges with. A quick example of this is hydraulics that can be used to build draw bridges. This is a necessity as some levels will have boats that will completely destroy any brides in their way.

The menu system of the game also works well. A small wheel of different tools and materials that can be used to build bridges can be brought up wit the simple press of a button. Players that really get to know the game can also use number hotkeys to access these tools, which makes for quicker bridge building.

While the obvious goal of Poly Bridge is to get vehicles from one side of a river to another, there’s also a secondary goal. This goal is to use as little resources as possible. Each level will place limits on how much money the players can use and what supplies are available to them. This means that creativity and solid builds are really going to go a long way.

Honestly, I sometimes lack in this department with bridges that just look like a mess of wood and steel held together with a lick and a prayer. Granted, there aren’t anything like lives in the game. So players are free to keep trying until they complete a level or frustration sets in.

One of the fun things about Poly Bridge is that is supports Steam Workshop. This means that players have the ability to download levels made by other players. This offers extra challenges beyond what the vanilla game includes. A sandbox mode is also included for those looking to make and upload their own levels. Potential trolls are foiled early on as levels must have been completed by their creators before they can be uploaded. The community is also strong here with 327 user-created levels being available as of this writing.

The graphics in Poly Bridge are really solid for all the game is. Rather than just going with simple 2D graphics, the game uses 3D models that have a unique style to them. It’s nice to see an indie game that’s willing to move away from the retro graphics that have become so popular in the last few years.

The audio in Poly Bridge is nice as well. Sound effects are alright, but I could’ve done with a few more. A car falling in water makes no splash noise whatsoever, which completely ruined my evil feelings of drowning that virtual family in the car. The game also has a really nice soundtrack that plays while building. It’s laid back and relaxed, which definitely helps fend of frustration during some of the later levels.

From what I’ve seen so far, I’m liking where Poly Bridge is going. The game already has a fair bit of meat to it for players to enjoy and the addition of Steam Workshop extends this further. It’s also sporting some nice visuals and audio that really complement the experience.

Being that Poly Bridge is still in Early Access, it won’t be getting a final review score. Instead, a placeholder score of 2.5 GiN Gems out of 5 will be used.