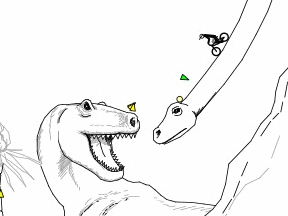 This week I have a game for you that I’ve been playing in my down time, one that I’ve been playing out of interest rather than having been suggested it. I’m willing to bet that a lot of you have seen things similar to the game I’m talking about (especially if you’ve watched some old McDonalds commercials). But play it? Many of you probably haven’t.

Canvas Rider is a version of the game Free Rider 2 that uses HTML5 and Javascript formats rather than the Flash player, so technically speaking these two games are almost the same thing. The only real difference is that in Canvas Rider you can’t create tracks, only play ones that have been previously made. For the sake of this Time Waster though, that’s all I need.

Canvas Rider is a simple enough game to play and understand: you take control of a baseball cap-wearing stick figure on a bicycle and have to ride over the drawn out tracks until you reach the end or collect all of the markers. To do this, you have to control how fast you’re going and your balance so that you keep your bike and rider level. Sometimes this is easier said than done, and it doesn’t help that the controls are a bit touchy. Don’t worry though, you have an unlimited amount of tries.

The tracks are what determine the level of difficulty in this game (which the same can be said of a lot of games like this). Mostly player made, you have levels that range from the straight forward to the really detailed and difficult. There are even a few autoplay levels that I came across, which are usually fun enough to watch. There’s no way to really tell which levels are which, so you’ll have to just click around and take what you get, but you’ll stumble across some good ones this way.

As simple as this game is, the overall look of this depends solely on the designer of each level. You have some that are really simple and not much to look at (this doesn’t mean that the levels aren’t fun though). There are also several levels that look really good artistically where the players have put a lot of effort into making things. I found several surprisingly good looking levels during my many plays.

Game mechanics caught me a little off guard in my first play-throughs (and made me think that I might be a little bit spoiled in some other games like this one). I’m referring to the checkpoints mainly. In Canvas Rider you don’t simply click a checkpoint and get to start from there. Instead the checkpoint saves exactly how you passed that point: your speed, your direction, and the angle of your bike. So if you hit a checkpoint and are about to fall over, when starting from there again you’re not going to be starting from a nice, upright state. Nope, you’re going to be about to fall over again. Thankfully you can use the backspace to clear your last check point and start from your prior place if you need to (be it another checkpoint or the beginning of the level). Believe me when I say that you’ll be putting that key to use on a few levels.

With nothing else to comment on, I’m going to go ahead and wrap this review up by saying that all in all, Canvas Rider is fun and a good thing to play in your spare time when you have a few moments to do nothing.

Canvas Rider pedals its way to 4 GiN Gems out of 5!