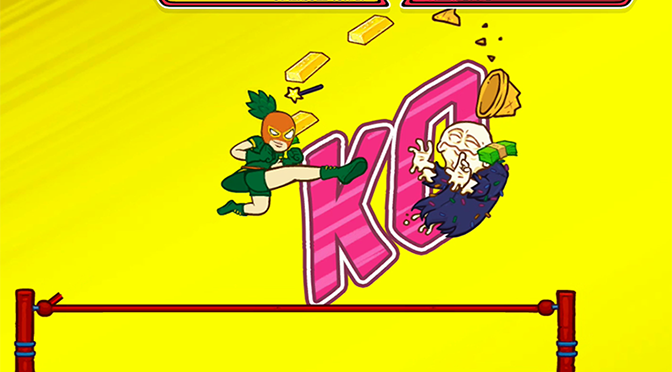 Man, I’m getting some major feelings of nostalgia. I was messing around on my smartphone this week when I discovered Burrito Bison: Launcha Libre. For those that don’t know, Burrito Bison was one of the very first games that I ever did a Time Waster review for. Things were different back then. The Time Waster was only posted to GiN’s Facebook page and I could only use 600 characters to review games. Needles to say, things have changed.

It’s been almost six years since my review of the original Burrito Bison and it only feels right that I commemorate that  by checking out this new game. Burrito Bison: Launcha Libre keeps the same basic idea from the previous games in the series. The player in put in control of the title character as he body slams and elbow drops his way through hoards of evil gummy bears. However, time brings change and Burrito Bison isn’t alone in his adventure. The player can unlock several different characters to crush gummy bears with.

The different characters play mostly the same, but they do have their own little quirks to them. Bison continues to rocket himself to the ground and crush a wide swath of foes. A new addition to the game is a female luchadore with a pineapple theme to her costume. She reaches down and pulls herself to the ground. She’ll also target special gummy bears more than normal ones, which made her my favorite to play as.

There’s also a guy with a chicken outfit, but I haven’t unlocked him yet. I know, I know. I should really check out every aspect o the game before reviewing it, but Burrito Bison: Launcha Libre lasts longer than previous games in the series. Also, I feel less pressed to play through it all at once now that it is on a mobile device. Previously I would just burn through these games so I didn’t have to leave them up on my computer. It’s nice to be able to take my time with them now.

Then controls in Burrito Bison: Launcha Libre are super simple. Players drag the luchadores back in the sling by sliding a finger on the screen. They then just let go to launch the wrestler. Tapping the screen will cause the characters to perform their smash attacks. It also will perform other specific tasks depending on what items and gummy bears the player runs into.

Burrito Bison: Launcha Libre is a launching game and that means the goal is too get a far as possible. One unfortunate part of the game is the limit on the player’s speed. Players have to buy higher top seeds. Without these upgrades, the game actually refuses to let them move forward with impassible walls. I didn’t care for this limitation as it felt like padding to keep the game lasting longer. There’s already enough content in Burrito Bison: Launcha Libre that I don’t feel it needed to be stretched out further.

There are loads of other upgrades that can also be bought in Burrito Bison: Launcha Libre. They include more special gummy bear appearance, different bosses to take on in the launch ring, higher bounces and more. It’s a lot of fun to unlock more upgrades and see just how far you can get. The different upgrades also help keep the game from getting too stale too soon.

The graphics in Burrito Bison: Launcha Libre are great. The game has the same basic look as the original from all those years ago. It looks great on a mobile screen and the action is great. I don’t exactly keep a high-end smartphone (Droid Mini, just in case anyone was wondering), but I was able to play the game without any hiccups.

The audio in Burrito Bison: Launcha Libre is also great. It only has a couple of songs in it, but they give off that Mexican feel that comes with the luchadore characters. The sounds effects in the game matches the music. Gummy bears screaming out as they get crushed and the satisfying sound of slamming into the ground are excellent.

Overall, Burrito Bison: Launcha Libre is a great way to waste some time. It was already a awesome browser game, but it feels even better on a mobile device. There are a few annoying microtransaction prompts, but they don’t do much to harm this enjoyable game.