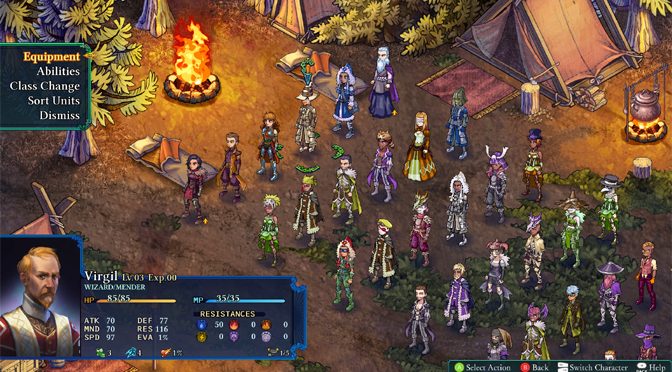 Fell Seal: Arbiter’s Mark hearkens back to a halcyon day of turn-based strategy RPGs- when the likes of Ogre Battle/Tactics Ogre, Final Fantasy Tactics, Vandal Hearts, Eternal Poison, and the like roamed free to entertain players who enjoyed queuing up actions.

Fell Seal’s story largely exists as a vehicle to move from location to location and battle; it’s uncomplicated and fairly forgettable, but it serves its purpose well. Your main protagonist is Kyrie, a girl who becomes Marked, someone who may take up the title of Immortal. Several other people from around the land were selected, as well, including one whom you see perform a very evil act at the beginning of the game, so him becoming an Immortal would be pretty terrible since Immortals are essentially justice, itself. Your overall campaign largely deals with trying to uncover why certain people were selected and preventing the more underhanded individuals from gaining the title. 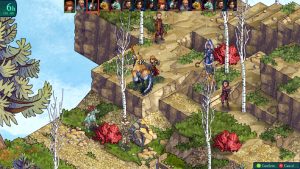 Players select where they want to go from a world map, where you can select spots that take you to story battles, patrol battles, or towns where you can recruit more characters, purchase new items, or fight in the arena which nets you a bonus to gold earned as well as an AP bonus for learning new class abilities (more on that later). The world map is pretty simple, overall, and serves as a vehicle to go from your camp menu, where you customize your characters jobs and equipment, to your next battles. 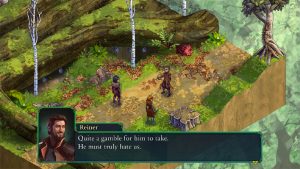 Combat in in Fell Seal: Arbiter’s Mark is about what you’d expect as a turn-based strategy RPG- you move units around the map, select the attacks that you want to utilize, use terrain and status effects to your advantage, and more. If you’ve played a game like Tactics Ogre or Final Fantasy Tactics then you should have a rough handle on how a combat encounter plays in Fell Seal. Turn order is determined based off unit speed, and after attacking, buffing, debuffing, or healing, you’ll select which direction you face and end that unit’s turn. Rinse and repeat this process until all of the enemies die or you’ve completed the objective for the battle. You can replay combat encounters in patrol battles in case you want to grind up to your perfect ability setup, but a lot of it isn’t really necessary, overall unless you just really want to min/max. 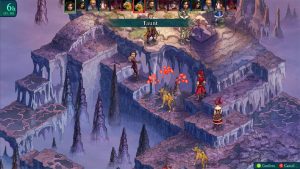 Class changing in Fell Seal is… well, it’s a ton like Final Fantasy Tactics, only it provides more information to the player without being forced to use outside sources like wiki pages. Class selection is done from a large, rotating wheel where you can preview what your character will look like in the different classes, what equipment they use, what the passive abilities of the class are, and how that class modifies your characters stat growths. The overall appearance of the menu evokes the job menu from the game which Fell Seal directly derives its inspiration (hint: It’s Final Fantasy Tactics). Different classes have differing requirements, though, so the Alchemystic job requires some levels in Wizard, Sorcerer requires 5 levels in Druid, and this holds true for a lot of the advanced jobs. Some classes may only be available after certain points in the game or after certain items have been acquired, but almost every job has at least an ability or two that can become valuable with the right setup. 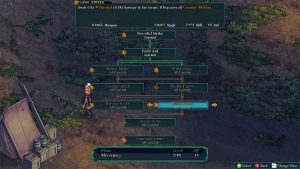 Learning abilities is performed by acquiring AP for the varying classes, and AP is gained through battle. You don’t just have to have a character in the Plague Doctor class in order to earn AP toward its abilities, however: Having a Plague Doctor in the party can provide AP to others who aren’t in that job, albeit at a reduced rate (called vicarious learning in the game). To add to the Class Change feature, you can also change a secondary class which can also gain AP and provide you with a second set of abilities- even if your primary class determined what equipment your character can use. Class mastery bonuses provide another set of boosts that you can utilize to your advantage if you’re willing to put the time in to acquire them. This, of course, means there’s a lot of customization in how you configure your team in Fell Seal. 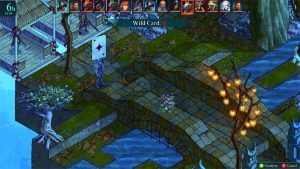 This means, essentially, how you develop your characters’ combat effectiveness ties directly to how you build them. You can respec your characters if you dislike how they have grown, but it’s very costly in that it also involves de-leveling your character down to level 1 (and if you do this with the main protagonist, it can leave you in bad situations where any recruits you can get are tied to her level, forcing even more grinding with your new low level recruits). Having a general idea in mind as you develop your characters is probably one of the largest advantages you have as you progress through the game. It’s also important to note that enemies also level with you to an extent, but they stay within specific level ranges- enemies for one area may be within the ranges of 18 to 24, so you can grind beyond the enemy’s level caps if you come across a particularly difficult encounter that you could not otherwise surpass.

The visuals are a weird dichotomy of almost-Western fantasy character portraits, while the characters those portraits represent are unabashedly presented in an anime inspired art style on the battle maps, complete with large, shiny eyes and pleasantly bright colors. The aesthetic largely seems to have been chosen to evoke that old-school feel- tons of older RPGs and SRPGs did this back in the SNES, PS1, PS2 eras. Either way, the graphics looks great and are quite visually pleasing as everything is colorful and crisp. The soundtrack is wonderful, though it could definitely have used a few more tracks. 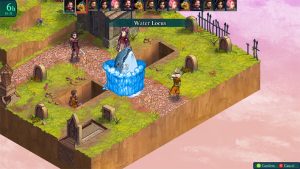 Overall, Fell Seal: Arbiter’s Mark is an excellent SRPG with loads of customization, classes to unlock, and gear to find and equip. It has a solid grip on the PS1 era nostalgia and, while it does evoke more popular SRPGs that came before it quite often, it still does quite enough right that it’s worth looking into for any person who even remotely enjoys Final Fantasy Tactics, Tactics Ogre, and the like. 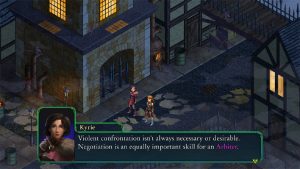 Those who prefer more linear character development systems, or those who find having too many options as a negative, may not like Fell Seal: Arbiter’s Mark. Those who don’t like SRPGs should definitely stay away, and Fell Seal goes out of its way to do minor twists to the formula and doesn’t bring anything to the table that would be appreciated by those who aren’t fans of the genre.