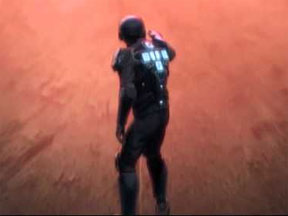 When I was offered the chance to review Anomaly: Warzone Earth, I was pretty excited, because I happen to love tower defense games. Even when I play normal real-time strategy titles, I tend to be a defensive player. That won’t win me any tournaments, which are ruled by the tank rush, but I do tend to clean up on the AI. And it’s a perfect mindset for games that are all about defending your territory.

Lately, tower defense games have been exploding in popularity, led by hardcore titles like Hidden Path Entertainment’s Defense Grid and more casual games like Popcap’s Plants vs. Zombies. So I was expecting something along those lines with Anomaly.

When the PR folks told me it was a tower offense game, I didn’t really know what that meant. I thought it was some gimmick. But in fact, Anomaly: Warzone Earth really changes the way these types of games play. You see, the enemies have all the towers. It’s your job to get around them to your destination in each level.

We all know that the peons who try to move through the tower maze in most of these games are little more than cannon fodder. But we are a lot smarter than that. Still, looking at how much the board seems stacked against players, I was a little weak in the knees at first.

The story is that in the not too distant future, a comet broke into two pieces and fell on Baghdad and Tokyo. Only it wasn’t a comet, it was an alien spaceship. Soon, robots came pouring out of the broken ship pieces and destroyed most of both cities. You play a squad of futuristic marines whose job is to investigate the aliens, look for weaknesses, and fight them if possible. The only problem is that the aliens have erected towers to shoot, scorch and electrocute you when you approach.

To break through these defenses, you can purchase a variety of vehicles, which you then roll through town. You plan the movement of your vehicles on a blueprint-looking map screen, and can modify that plan at will, which thankfully pauses the action. There are some rules. Your vehicles can’t actually turn around. To go the opposite direction they have to circle the block first, which might take them into a more dangerous war zone. Then again, circling the block is a good strategy if you need to buy a little time to go and collect resources.

As a player, you only have direct control over your commander unit, which is a guy in a suit. He’s not restricted like the other vehicles in terms of movement. He can cut across vacant lots or shimmy down little alleys where the big vehicles can’t follow. He can’t go through buildings or into water, but that’s about the only places that are off-limits. He also can’t really do very much directly to the towers other than later in the game when he gets a limited ability to call in an air strike. For the most part your commander simply runs around and supports the vehicles, which pack the real punch in destroying the towers.

There are a variety of vehicles that you can put in your squad, and you can unlock more as you go through the story missions. Vehicles move in a convoy pattern, following each other in a line. Some, like the APC, have a lot of armor, but a weak weapon. Some, like the rocket launching walker, have a powerful weapon and a good range, but thin protection. A few do special things like provide shields for themselves and the units on either side of them. You can only have a limited number of vehicles in your convoy even at higher levels, there are only so many slots available, so placement is vital.

A good strategy I found is to put a tank up front because it has a lot of armor and a fairly big gun, and it’s going to encounter the towers first as you drive up to them. Then I put a shield unit behind that to give even more defense to the point unit. Finally, I put a rocket launcher, which is also protected by the shield unit it’s beside, into the third spot to provide an offensive punch. The next three slots I normally use to pile in some experimental vehicles as they unlock.

Your commander basically runs along the route the vehicles are taking, he moves much faster than they do as they plod along, and supports them with one of four possible powers. First, he can repair damage by putting down a little repair icon symbol on the road. It only lasts for a little while, but can just about completely heal three vehicles as they roll past, so long as you place it right. Secondly, he can put down a smoke screen, which affects a pretty big area which can hide an entire convoy for a short time, making the enemy turrets misfire. Thankfully, friendly units are not affected and can fire back normally. Thirdly, you can place a decoy, and all enemy turrets in range have to fire at the decoy and destroy it before they can shoot at you again. Placing a decoy protected by a smokescreen makes it last a lot longer, so it’s advisable to do that if you can. Also, don’t place vehicles near the roads your real vehicles are traveling on if the enemy turrets have area of effect weapons, or you will still take splash damage.

The final power is an air strike, which can destroy low-level turrets and damage more powerful ones. But it only hits a very small area. You are much better off relying on your vehicles to take out turrets for you, but the air strike does let you affect the map directly.

You don’t have unlimited powers. You collect icons for the different powers when dropped by airplanes that are supporting your operations. You can also earn them by destroying towers. And one special vehicle can generate them for you late in the game, but it takes up a precious slot in your convoy, so I almost never used it. Vehicles can switch positions within your convoy at will, so it’s possible to change your attack plans for different situations.

You can also swap out the vehicles in your convoy at will, so long as you have the money. So you can start with a cheap APC and then upgrade that to a tank when you raise the funds. Vehicles can also be upgraded to more powerful versions, which increase both their armor and weapon. But if they are lost, you lose everything you’ve invested into them. Money is earned by destroying turrets and by collecting valuable alien metals that are scattered throughout the map. The metals are normally well-protected, but they earn you much more money than killing turrets, so it’s good to go after them.

Missions are actually varied a bit. Some are timed and some require special tactics, though most are simply harder versions of the ones that came before. Still, with a good story backing things up and even a little mystery, I never once got bored.

Anomaly: Warzone Earth has been out on the PC through Steam for a little while, but is brand new to the PS3. On the PS3, there is an exclusive mode where you can cooperate in an attack with another player locally. I found this part to be pretty fun, and a welcome addition to the overall package.

Graphically the game looks surprisingly good for a PSN title. The cities look like actual satellite maps of real places, and the vehicles are all different enough that it’s easy to see at glance which one is which.

The sound is a little bit of a mixed bag. The music is fitting and the voice acting in Iraq is spot on. But when you get to Japan, the air force commander you work with there sounds like a white guy pretending to be Asian, or perpetuating a stereotype. It’s so bad as to be borderline offensive and I cringed every time he spoke, which was a lot.

Once you beat either of the two cities in story mode, you can go back and play a special battle where you have to defeat waves of turrets spawning around power plants. It’s a nice way to extend the gameplay even more, though the story missions are much better than the straight combat ones.

Anomaly: Warzone Earth is a good twist for tower defense, freshening up the genre and probably making it even more popular. The mobile nature of the game should appeal to realtime strategy players who like to play offense and defense, and help to bring a few turtles like me out of their shell. It’s worth the money and earns 4 out of 5 GiN Gems.