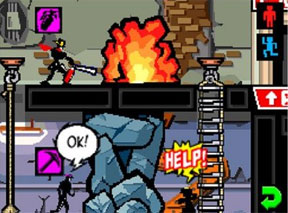 If you’ve heard of Exit before or if you have previously played Exit on the Playstation Portable then you are familiar with how unique this game really is.

Exit comes off as a sort of film noir game where you would expect smooth jazz to be playing during the cut scenes with a cappuccino.

Actually Exit is quite the opposite. You play as a professional escape artist named Mr. Esc. He is a freelancer who is hired to rescue people who have been trapped in perilous situations. Whether it’s a fire, a flood, or an ice storm Mr. Esc is the guy to call. Mr. Esc will have to save both humans and animals as he attempts to enter the scene and guide the victims safely through danger to the exit at the other end.

The game starts off with a stage select screen set up kind of like a multiplication table or the Battleship grid. I recommend definitely starting with the tutorial so you can learn all of the moves and how to navigate. Once you get the hang of the controls you will need to guide Mr. Esc with the D-Pad and your stylus.

As Mr. Esc comes upon the victims he will need their assistance in making it through the rest of the scenario. You will need to use your stylus to direct them where to go, whether or not you want them to stay in a specific spot or follow you, and to retrieve valuable items like fire extinguishers. In some cases Mr. Esc will have to go on ahead of the victim to clear the way for them to escape.

The controls for Exit DS are not very difficult to master. You have an on hand map on the top screen of the DS as a constant reference. This will help you greatly in navigating a path to escape! The game is both stylus and D-Pad controlled. You move Mr. Esc with the D-Pad and you use the stylus to point and move an onscreen cursor to navigate the victims you save.

On a side note with the controls, the victims aren’t always too bright. I had one scenario where I was trying to locate a switch to turn on the sprinkler system to put out a large fire that was blocking the path of the lady I was trying to rescue. I pointed with my stylus to where I wanted her to go and she actually hit the flames and died. Just walked right into it! Needless to say I had to start that mission again.

Other than that incident the controls really are simple to grasp. It’s a matter of scouting ahead, locating the valuable items for that particular scenario, and then plotting out your moves for Mr. Esc and the victim. Now, as I said before the victims can either be human or animal each having specific strengths to help you. A large adult can help you move heavy objects. A heavier adult will require some extra assistance but can still be extra strength. A child or an animal can get into small places where Mr. Esc is too big to go. It all factors into your strategy.

The graphics in Exit DS are similar to a 3D comic book. The environments are very colorful and the character shapes are very unique. It’s a very original look. The cut scenes are 3D animations where the scene moves around but the characters stay put. They just shift with the motion, kind of like a digital comic book where the frames are projected in 3D to give the frame life.

Now to compare Exit DS with the PSP version, I’d have to say that the first noticeable difference is the obvious screen size. The PSP has a larger screen. The PSP version is also a disc format so the graphics are clearer and a little more detailed. You will have that when comparing games that are both in disc and cartridge format. But don’t lose heart here, dear gamer. The DS version is still just as amazing of a game as the PSP version. The PSP version also requires you to use the analog stick to move the cursor around and navigate through each level while the DS version uses stylus interaction. Honestly, that’s it! Those two comparisons are really it.

Exit is a great game to add especially for puzzle lovers. If you’re not into puzzles I would still give a Exit a try just for the experience. If you’re a comic book fan you will probably love the art and style. And if you like Exit on the Nintendo DS you can also find it on the PSP and the Xbox Live Arcade.