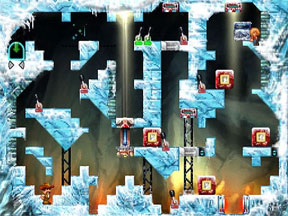 Of all the games I’ve played on the Nintendo DS, Puzzle Expedition is far and away the one I have found most enjoyable and rewarding, and would most heartily recommend to anyone who enjoys a puzzling challenge. Even being frustrated by it was an utter delight, and that’s after I got over several days worth of just being shocked and thrilled to have a puzzle-genre game containing actual human-designed puzzles (rather than various forms of widget hunting or word games or computer-generated matching activities) in my hot little hands. Don’t get me wrong; I love the explosion of thinky little time-wasters, but real puzzles designed with twists and solutions have become a rare delight. The overall plot was really disappointing, but I’d never give a steak a bad review for not coming with a baked potato.

Puzzle Expedition for the DS is made up of ninety spatial problems (a hundred in the PC version) that require the player to figure out how to get two chunky little characters, Anna and Ben, to the exit. Generally this involves pushing blocks around a 2D platformed board to make it possible for the characters to climb up or down, or cross gaps, or get around obstacles.

Both characters have the same capabilities. They can push blocks, but not pull them. They can climb up anything as tall as two grid squares, or down anything as high as three. In rather rapid succession, the game introduces elevators, retractable platforms, block teleporters, and character teleporters, as well as red blocks that explode when they contact each other squarely.

With this palette of simple principles, the game designers have created a treasure trove of kinetic riddles that are a joy to attempt and a treat to solve. The music, art, difficulty, and trappings of plot seem aimed at an older audience, but there’s nothing that’s particularly inappropriate for kids. Stylistically, with its 2D platform and classic-mario-like animation, the game resembles the Indie hit "Braid" more than last year’s sickly-sweet 3D puzzler "Ilomilo," though I would expect fans of either to enjoy Puzzle Expedition a great deal. Fans of the old proto-blizzard SNES title "The Lost Vikings" will probably also enjoy Puzzle Expedition, though it lacks any action elements.

The game lacks most conditions that can make puzzle-solving frustrating rather than challenging. While it is possible for characters to be killed by, for example, being dropped off a retracting platform or having a block pushed down onto them, the game doesn’t go out of its way to punish you, and consequences for death are the same as for mistakes that make the puzzle unsolvable: you have to start the board over.

There’s no time limit on any of the puzzles, characters won’t wander off ledges that are too high for them if your controller dexterity isn’t the best, and there’s a function to save a board while you’re playing it. There’s no special amount of coordination required for playing in general, though there were three boards that had solutions or shortcuts that involved a small piece of agile controller work.

Most puzzles, once you’ve figured them out mentally, don’t take more than ten minutes to solve physically and most take less than five. But even so, the ninety puzzles that come with the game kept me busy for over a month, and finally solving them all was very satisfying.

The game lets you skip and return to puzzles, which helps relieve most feelings of being simply stuck, but you can only have three games skipped at a time, which, while occasionally frustrating, is great for making you go back and "try, try again" once you’ve had some time to process.

The high puzzling quality and the discipline it enforces in addressing them makes it perhaps not the ideal game for occupying long blocks of uninterrupted time, as difficult solutions come more easily when the game is put down for a while, but I consider that a plus rather than a minus. It was a wonderful change to have, after a session of puzzle-gaming in the evening, an idle thought process that actually worked towards an interesting goal rather than the bizarre treadmill of thoughts that most puzzle gamers have had at one time or another, otherwise known as "Tetris dreams." No fewer than five times during the process of playing this game for review did I get up in the middle of the night because my brain had finally hit on an answer.

I was initially thrilled and ultimately disappointed by the game’s implied plot line. The little narrative of Anna’s obsessive quest to rescue her father from his own obsessive quest for an occult object called "The Tear of God" seemed to have a lot of potential for twists and meanings. I got ahead of myself in hoping that Puzzle Expedition might redeem some of the ego-maniacal heavy-handedness that Braid put into trying to pioneer a potential higher-art status for puzzle games, but ultimately the tasty tidbits the game drops along the way fizzle, and the end of the quest is fairly standard, dull, and slightly baffling.

After eighty levels of thinking and solving, it’s frustrating that the ending "cut scene" involves the characters doing random, facile, unexplained things that fix the world for no reason. It’s hardly a damning flaw however, since the more tangible reward for completing the first eighty levels without any lingering skips is (ta-da!) ten more levels to play. That "more game!" really feels like a meaningful reward says a lot about how fun the game is despite the narrative let-down. Still, puzzles this clever want a smarter story.

The background art ranges from merely well-done to stunningly lovely. The four different pieces of background music used for each area are all suspenseful and evocative, and generally don’t grate like some looped music can. The animations are also great. You really feel for your two sprites as they stalwartly struggle to push blocks around the board, and everything that moves gives a good sense of weight. The drawings of the characters in the still cut-scenes are, on the other hand, surreal and repellent, resembling dull-witted plastic bobble-head dolls. Game consumers generally don’t expect or demand art renderings of characters to resemble their game-play sprites in dimensions, so I don’t understand the unfortunate design choice.

I only encountered two technical issues, and neither were experience-destroying. The game froze occasionally after reloading a board from a quick-save, requiring a reboot of the DS, and I was unable to get the grid function to work. I can’t guarantee that either of these issues aren’t just a matter of my needing a new DS test unit soon.

Puzzle expedition does share the inherent problem of weak replay value common to true puzzle and riddle games, though the large number of puzzles does offset that somewhat. There’s enough time to forget solutions that came easy the first time through and might pose a challenge the second time, not to mention to joy of handing off your favorite brain teaser to a friend and seeing if they get it faster than you did. Even with the limited replay value, I’m still thinking of buying the PC version just to get ten more levels, and consider the prices listed online to be a bargain. You can click on the chart at the top of this review to check them out from Amazon.