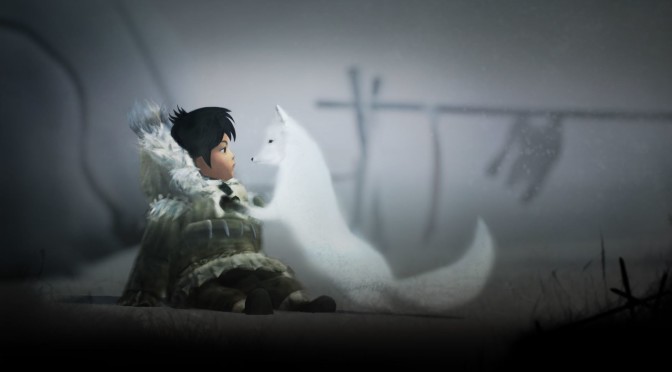 I really wanted to love Never Alone, because it was trying to do something great. Tragically, it let down the side with some sloppy gameplay. All that withstanding, there’s still a lot to love about Never Alone.

The games industry offers a masterclass in cultural appropriation. Games often dip into different cultures to create a new boss or a cool setting, with little or no background or respect paid to the people whose myths they are stealing from. Never Alone turns all that on its head, which makes it an important game, even if it’s not a perfect one.

Never Alone’s developer, Upper One Games, is the first indigenous-owned games studio in the US. The game is a result of co-operation between the Cook Inlet Tribal Council and games publisher E-Line Media. The Iñupiat, an Alaska Native people, played a key role in the development, using their mythology to tell the story of Nuna, an Iñupiat girl,  and her arctic fox, as they struggle through a never-ending blizzard.

The game starts with animation in the style of native bone carvings, which the Iñupiat use as a way to pass on their stories from one generation to the next. The narrator speaks in the native language, which adds to the cultural immersion.

Overall, Never Alone looks gorgeous, with its soft focus, landscapes, rendered in soft blues, as if being seen through a haze of snow. The fox stands out in brighter white, with just its coal, black, slanted eyes and nose for features. But lovely animation, lends the fox character, as it toils along beside Nuna and yelps, if she dies.

The gameplay is fairly standard side-scrolling platforming and puzzles. Nuna and the fox are interchangeable, playable characters or can be used in co-op mode. The fox can scramble up walls and reach  areas Nuna can’t get to. However, Nuna has a traditional weapon, called a bola, which she uses like a catapult. In addition, she can drag and push objects, opening up new pathways.

Never Alone’s innovation comes with the way it eschews levelling up, in favour of knowledge. As you complete levels, a new piece of documentary footage is unlocked, offering an insight into the Iñupiat people and their culture, as well as adding depth to the things you’ve just experienced in the game. The floating spirit creatures become more than just an attractive means to solve a platforming puzzle, when you understand their cultural context.

Unfortunately, the game is marred by unresponsive controls. It’s by no means unplayable, but a platformer with controls that don’t always work, is a one-way ticket to frustration. I can forgive that the gameplay is quite repetitive, because the stories and the documentary nuggets keep me playing. However, I find it hard to forgive having to perform a simple action, several times because the jump or climb button doesn’t react in time. And yet, I sort of do forgive it.

Never Alone is a charming little game that pays deep respect to the community and culture that inspires its story. It may have a few glitches, but they can be sorted out with patches and the gameplay isn’t giving us anything new, but there’s still a lot here to enjoy.

The reward system’s documentary shorts are worth the entrance fee, alone. You don’t have to watch them, but you’d be missing out on an insight into a different culture, as well as an insight into the game itself. It beats a pair of magic boots or a gun with a higher damage rating, any day of the week.