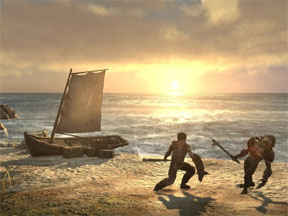 Arcania: Gothic IV is a good game, but could have been great

Reviewing this game did not start out very well as my Xbox unfortunately got a bad case of the Red Ring of Death five minutes into the game. After waiting for what seemed like forever, I got my system back and was able to start playing.

My absolute favorite genre of games are RPGs, so I was excited to check out what is for me a new series, though this is the 4th game in what I understand is a very popular set of games in Europe. And you could almost consider Risen as an unofficial part of the series as well.

To be clear right from the start, Gothic IV is no Elder Scrolls. It’s no Oblivion or even a Morrowind, but it does have a beautifully designed world and an overabundance of loot. And coming out over a year before the next Elder Scrolls game, Skyrim, it could be a nice filler for those looking for an adventure.

This story of this Gothic takes place 10 years after the events in the last game. After an opening dream sequence where you play as King Rhobar III and learn the combat system, you start the game proper. It’s kind of nice for new players to learn how to do things without actually risking your neck right off the bat, and I appreciated this stealthy tutorial. You then begin the game as the central figure, a nameless hero in the realm of Myrtana.

Now that you are out in the world you get your first glimpse of the really breathtaking world. Movement around the world is seamless from cave systems to a huge town with the only pause for loading taking place after cut scenes or teleporting. I don’t know how it is on the other systems, but on the Xbox 360, I think the engine behind this game is almost more powerful than the system can handle, and the frame rate suffers at times.

Never the less, the details are amazing. Including the physics of the system, which has enemies rolling away after a particularly devastating blow from your weapon or spell, a nice touch for the realists out there.

Sadly, the characters you interact with are not as good-looking as the world, and the dialogue in the game also suffers from its non-English roots. It is a nice touch to hear the characters complaining about wet laundry and things like that when it starts raining.

One of my favorite parts is that there is an abundance of items you can steal in the towns, but no moral or legal system to stop you from grabbing everything you can pick up. This does get a little silly at times with all the money you can make selling stuff you pick up.

Combat is pretty simple with move, attack, and block and handled primarily with the main buttons. While combat is in real time, the game pauses when you go into your inventory and use items like potions and food. As mentioned earlier, there is also spell casting, and switching between melee and spell casting is cumbersome to say the least.

With all RPGs there is leveling and character customization in Gothic IV. The three tracks are Combat, Archery, and spells. Focusing in one area will make you really powerful, but going with a balanced approach will make your progression peak just as you are getting to the mid to higher level skills, so that is what I would recommend. I suspect the difficulty levels of the encounters are setup for a character who is doing this.

The area that was most disappointing to me was in the quests. In a day and age where some thought can be put into quests to make them more interesting, so many of the quests where fetch and collect. Top RPGs have to stand out or do something new, and Gothic IV is lacking. Without a really deep story, hardcore RPGers are going to get bored with all the Fedex quests pretty quickly. The combat sort of makes up for the lack of story depth, but here again, Gothic IV isn’t trying to be an action RPG, so the choices are puzzling.

If you are looking for an easy game with lots of wonderful scenery and a copious amount of loot, then this is the title for you. If you are looking for the next Elder Scrolls, then this is probably not a good fit. There is nothing really horrible about Gothic IV, but it just comes off as a plain vanilla RPG without anything to really help it to stand out. And today when RPGs have to be highly polished tours of force, that could be the kiss of death.