TT Isle of Man Ride on the Edge 2

TT Isle of Man Ride on the Edge 2 recently hit the market for Nintendo Switch consoles and GiN has the total spill on Kylotonn’s new motorcycle game. We’ve got tons of speed, some pretty cool rides and plenty of places to go riding on the edge! The question, though, is does this new racer have the gas to stand out from amongst the competition and win over the hearts of racing enthusiasts? Let’s take it out for a spin! 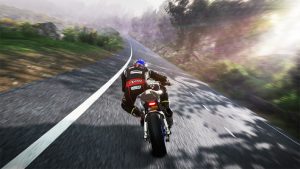 First impressions, this installment looks visually upgraded from its predecessor sporting a much more clean and polished look. The sights are fleshed out in bolder more contrasting colors and its clear more attention to detail has been paid to both tracks, rides, and real estate. You will notice a slight downgrade in graphics on the Nintendo Switch but the overall visual quality is solid and fairly on par with the other more powerful consoles whether your playing in handheld or docked mode.

Audio is crucial in games of this genre and TT2 is nothing short of ear appealing. With every stretch of the road you can hear the engine RPMs building underneath you and the wind breaking around your helmet as you reach top speed and watch the roadside blur into obscurity. This critical feedback helps deliver the complete race experience giving you valuable insight regarding when to get on and off the throttle and how your bike is responding to the course. There’s nothing more satisfying than finding the groove and hearing the track come to you or as gut wrenching as listening to the competition come roaring past you for the lead after a costly mistake.

If you played the original game then u know the Isle of Man series is known for its ultra realistic physics and challenging ride difficulty. Whether you’re a new or seasoned pro you can expect to lay your bike down in the road your first number of times out. This game is not for the casual or faint of heart but more ideal for moto racing enthusiasts.  A rather skimpy tutorial on the riding basics is offered up and then you’re set free to figure out the rest on your own. The time it will take to acclimate to the sheer speed and handling of your ride will definitely test your fortitude and likely lead to bouts of frustration and perhaps some rage quit moments. 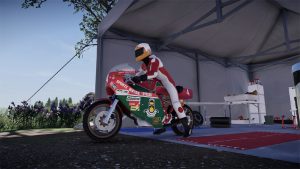 Amazingly enough, however, if you can weather the steep learning curve then you will find  Isle of Men to be rewarding in more ways than one. The first time you successfully take a couple corners, you will feel an immediate sense of accomplishment and need to improve. Suddenly, you’re bike doesn’t feel as heavy or overly sensitive, you’re confidently dancing between the brakes and throttle, memorizing every turn of the track and pushing the speed envelope in and out corners trying to knock off those few precious seconds to give you an edge on race day. As your persistently addictive grind and efforts begin to pay off, your gameplay experience goes up a couple notches and the real fun begins. 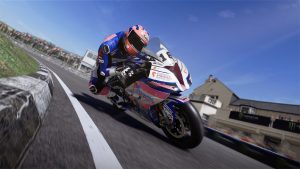 Once you’ve successfully honed your skills you can put them to use in the games featured modes including, Time Attack, Career, Free Roam, and Multiplayer modes. In Time Attack mode you will race against your fastest time in an effort to raise your overall efficiency on the track. Free Roam is great for getting to know the road and to get comfortable with your bike. Although, the map is limited to Ireland there is plenty of road to stretch out your venture.

[amazon text=Start your career as a racer with a copy of TT Isle of Man Ride on the Edge 2 from Amazon!&asin=B074BMD7RR] 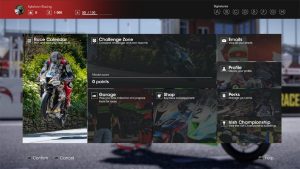 Career Mode is the main mode of the game where you will begin your pro career with the hopes of racing for the prized Tourist Trophy before seasons end. After completing your first Time Trial event you will be offered a host of employment opportunities from other race teams based off your performance. Each job opportunity will come with its own list of incentives and requirements for you to set out and meet. As you progress through the season you will earn money, rep, perks, and part upgrades to help give you the edge over the competition . 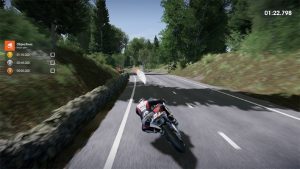 When you want to test your metal out against live opponents multiplayer is the mode for you. You can create an offline lobby to race against your friends locally or you can opt to go online and race other enthusiasts globally. It should be noted, though, that the Switch lobbies are slow if not non-existent when it comes to online competition.. That’s not necessarily a knock against the game itself, though, but more so on the part of Nintendo to harness a stronger interface for its waning online community. 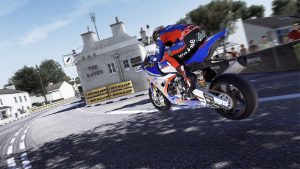 All said, TT Isle of Man 2 is a worthy sequel to the original game and ideal for any hardcore race fanatics out there. Its true, the game’s ultra-realistic physics and challenging learning curve make it hard on first impressions. However, the satisfaction of mastering the track leads to a much more heightened gameplay experience and slow addiction to get back out on the track and ride some more. For that, this one finishes at a respectable 4 out of 5 GiN gems.