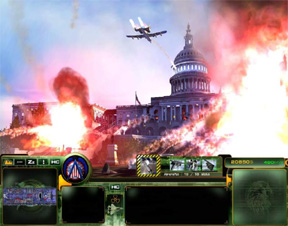 Those of you who read books by Dale Brown know he is a real master of the trade. In many ways his war and political corruption tales are like Tom Clancy’s, but don’t get bogged down in all the technical mumbo jumbo that make some of Clancy’s books read like a Jane’s Guide to Weapons.

Dale Brown’s latest book hits the shelves in July. Titled Act of War, the game draws a not-so-far-fetched line between oil companies and worldwide terrorism that is driving gasoline prices through the roof. Talk about a timely plot. Have you filled up your gas tank lately?

The game Act of War mirrors the book and lets you play a lot of the cool missions you will read about there in a tense real-time format.

Graphically, the game is quite good. Cities are well rendered and special missions like one when you are trying to control a crowd have literally thousands of people on the screen at one time.

But the coolest part of the game is how tightly the storyline is integrated into the plot. Most games just give you a mission briefing and then send you on your way. Here, you get your mission briefing, but expect a lot of things to change as you move through a mission. This triggers some very well-done cut scenes in full motion video that will advance the plot for you and set the mood.

For example, your goal might initially be to find a missing diplomat in a big city, but then when your embassy has a terrorist truck bomb take out an entire side, you need to rush over there and defend them from any future attacks. Also in the field, sometimes you will get last minute reconnaissance that will change your list of priority targets. So be ready to shift gears at a moment’s notice.

The acting for the cut scenes is a little bit of a mixed bag. The good guys act pretty well and are believable in their roles. The terrorists however look a little bit fake. The entire video portion of the game was filmed by a video production in Canada. It looks like they had a great time making the movies and in general they did a fine job.

The RTS format is pretty standard here for most of the missions. You set up methods to get a little bit of money all the time and can get a bunch of it if you capture opponents instead of killing them. Basically, most of the terrorists will try to surrender if they are getting close to death, though some will die too quickly. If you can move a soldier into range you can capture them. And if you have the right type of jail, you can interrogate them, which leads to more money flowing into your revenue stream.

You use the money to buy units like infantry and tanks. And you can also set up a means to launch air strikes from both jets and predator drones. I love the air strikes because it really adds a lot of power to your arsenal. You still have to do a lot of groundwork like clearing SAM sites or taking out power plants to make it safe for your planes, but you will find your "angels on your shoulders" a powerful asset.

There are a few mission problems, like if you think out of the box you might solve a mission in a way the developers did not expect. In one mission I took over an enemy fortress using some very well-planned bombing runs combined with an advance sniper team. Later on after I took out a secondary facility the cut scene came up and showed me the main fort, and asked me to take it over, even though it was already solidly in my control.

I doubt you will get bored playing as the missions are pretty diverse. You will find yourself in foreign lands fighting more traditional wars and in the streets of San Francisco and Washington DC fighting a more anti-guerrilla campaign. No matter where you are, you can zoom down all the way to street level, which gives you an amazing amount of detail like the ability to read accurate road signs for the area. In DC, you can zoom in and see which way to get to 395. In San Francisco, you can follow the signs to the stadium. That’s a pretty cool level of realism.

Almost everything in the level is also destructible, from those accurate road signs (oops, my tanks never quite stay on the roads) to large buildings that can be blown up with repeated fire, or at least turned into smoking, fiery husks.

As troops fight they gain experience, which makes them more accurate and deadly. And you can keep your troops alive by rushing in medical choppers if they are wounded. Really wounded men will need to be flown back to base to the hospital, but lightly wounded ones can be healed on the field of battle. The same is true for vehicles, though they mostly have to be flown back to base using transport choppers for repairs. So it’s in your best interest to keep your veteran troops alive whenever possible.

Most of the missions in the single player game can be played in multiplayer mode. Multiplayer is a lot of fun, and you never know what your opponent is going to try.

Act of War breaks new ground in several areas. Graphically, the detail levels are pretty amazing. The storyline is more tightly integrated into the plot than some RPGs. And the game might signal a new era of book and game cooperation if both do well as a result. Act of War earns 4 and + GiN Gems.