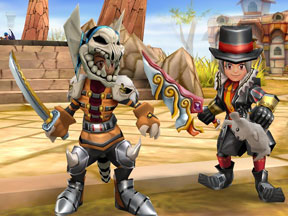 What do you get when you mix cutesy Japanese anime with World of Warcraft? Rush On Seven Episodes Online… otherwise known as ROSE Online. This quaint MMORPG from developer Triggersoft and publisher Gravity Interactive was infused with lots of spirit! On the surface it’s very colorful and totally reminded me of classics such as Super Mario Brother 3 and Legend of Zelda: Link to the Past.

I couldn’t help but feel nostalgia for games of yesteryear while playing. Yet for all its charm for some reason Triggersoft seemed content to not break any new ground. They fashioned a game that follows the traditional method of advancing, and the bane of ALL massively multiplayer gamers… grinding; and boy does it grind!

Before you actually enter the game a launch screen runs showing messages of the day as well as a patching program. To date ROSE’s launcher is one of the least friendly on resources I’ve seen. My 2GHz system came to a grinding halt as the launcher did its thing. I’m not sure "why" the launcher needs so much CPU resources to run. I understand maybe the hard drive being slow for patching reasons, but the CPU? It made no sense to me. But I digress; you want to hear about the game so let’s continue.

When you first enter the game, like WOW you’re deposited onto a newbie island that helps you advance quickly. There are three or four fairies that give quests but the quests actually begin once you reach the mainland. Meanwhile on the island you have no other choice but to kill everything you see! On the pro side at least the controls are simple to understand. Left click controls combat, looting and navigation, while right clicking handles direction and looking around. On the con side is the music. Initially the medley was happy and fun, but it definitely becomes tiresome. Twenty minutes into the game and you’ll go to options and turn off music.

Admittedly once you leave the island the mainland is fun: lots more players and lots to do. So you rub your hands eager to advance.

ROSE is made up of seven planets also known as episodes (officially termed "Seven Episodes"… yes I know, Asian import games seem to perpetuate English but we still love them regardless!) So on the starting planet of Junon everyone is teleported to a beach south of the Adventurer’s Village in the Adventurer’s Plain zone.

Each planet has lots of large separate zones. Which leads me to ask why have zone loading? If you’re used to games like Star Wars Galaxies or World of Warcraft that virtually eliminates zone loading then ROSE will probably frustrate many. Course if you’re a veteran of Anarchy Online then you’ll probably feel right at home.

Inside the Adventurer’s Plain you begin as a "newbie" in the truest sense of the word. You have very little cash, low level, and you probably have no idea what you need to do. But all of that quickly changes. You see in ROSE the WHOLE point of play is to "grind." Say it with me… GRIND.

Everything else is secondary. There are two kinds of grinding: level and money. For those that have played many MMORPGs it becomes obvious those that money grind do it for "nefarious reasons." However, in order to level at your highest potential you need money to buy the latest and greatest equipment. A plus is that with so much required grinding your purse will become very large over the next twenty levels, enough to let you buy the latest equipment for your chosen class.

Initially you’re classified as a visitor. It’s one point of the game I did enjoy. You have to actually work and do quests to obtain a classification. Once you become classified for the most part that’s the class you stay with. It becomes very difficult at higher levels to reclassify yourself because the way in which you spend your skill points is directly tied with your chosen class. ROSE also kept the formula for classes overly simple. Despite having fancy names, these classes are basically standard. You can become a Warrior (like you’ve seen from any other game), a Muse (in essence a WOW mage), a Hawker (WOW Rogue without the invisibility), and finally a Dealer (like a player merchant from SWG before the NGE patch).

Here’s the kicker… it doesn’t really matter which class you select because equipment prices are homogenized. Across the board: armor, weapons, jewelry, scrolls, and so forth all have the same price based on level requirements. There’s also very little variety. You have to buy a "blue hat" and a "spear" that everyone near your level uses if you want better damage and protection. And once you reach the next level tier you’ll yet again upgrade to equipment others are using. From all accounts the game doesn’t really have a crafting system. Players can’t make cool looking armor and weapons. Equipment of worth is usually purchased from NPC vendors. However as a Dealer or someone that has enough skills you can place a small vendor anywhere you want and sell your looted wares. And to the anger of many, anywhere really means anywhere.

When grinding burns you out (and it will) you can speak with various NPCs through out Junon. Most have some sort of courier, contact, or destroy mission you can try. But the problem is it doesn’t matter. If you want to level, questing is a waste of time. You receive trivial experience points and the items gained -in a word- suck. You’ll tire of questing quickly and be back to grinding. So the question you might be asking is what’s worth the grind? Two factors: Seven planets and PVP, both of which are in the early stages.

Junon is the planet everyone starts on but there are six others either available or in development: Skaaj (a "love" planet), Hebarn (evil), Eldeon (ancient legends), Luna (sleepy), Orlo (gold), and Karkia (wasteland). I can see the developers were greatly influenced by Star Wars Galaxies.

Each planet is as big as Junon so there’s potential for variety. And as far as PVP goes from my research this question was posed to David Kim, the marketing manager for Gravity, "Does the game support PvP and if so, how is it handled?" And his response was, "PvP is supported in the game, and it’s only accessible within the Training Grounds (a PvP based map) and on Clan Fields, which only clan members may access. More plans for PvP are currently in development." (From the GameZone article: http://pc.gamezone.com/news/12_19_05_01_50PM.htm)

ROSE online has recently been moved to the bottom of my play list. Like any new game it’s fun. The graphics remind me of classic console titles and it has a bit of charm that helps, but overall it’s one big grind (even after 38 levels). Some might see past the grind to the ultimate goal of discovering the six other planets or participating in PVP, but I think for most they will burn out before that ever materializes. Of course MMOGs are different things for different people. Feel free to try the free 7-day trial (no credit card required) at http://www.roseonlinegame.com/. You may or may not like it. But if you burn out after seven days … don’t say I didn’t warn you.