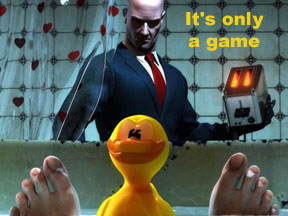 I just finished playing the fourth installment of one of my favorite games, the Hitman series. Reviewer Chris Richards just finished an excellent review of the game too that will be posted here very soon. Suffice to say that the review is a good one, and fans of shooters that actually make you think are going to be overjoyed with Blood Money.

However, I thought it was ironic that the game came out a few weeks ago when beltway sniper John Allen Muhammad was sentenced to life in prison in Maryland. It was more or less a trial exercise since he was already sentenced to death in Virginia and pretty much everyone in the world knows the guy was guilty.

The reason I find it ironic is because when the second game of the series came out is when Muhammad and his partner were going around the Washington DC area killing people. At the time I was assigned as a freelancer for another publication to write a review of the game. I was just about finished my review when the sniper shootings started taking place.

I actually learned of the rampage from a taxi driver in Las Vegas of all places. My wife and I were on vacation that week and were going from the airport to our hotel. The taxi driver asked me where I was from, making generally nice conversation as some of the drivers tend to do. When I said I was from Maryland, he asked if I was from Montgomery County.

I found that a little odd but figured that perhaps he was from the same area. Very few people I have met in Vegas, even those who live there, are actually from there originally. Everyone seems to have come from somewhere else to that wonderful city in the desert.

He looked back and asked, "Did you know anyone who was killed today?"

He went on to explain that while I was flying out there, several people had been killed by an apparent sniper. He named towns like Wheaton and Kingston that were very well known to me. And he said some people died at gas stations, which was a little chilling since I had filled up the tank there before driving to the air port that morning.

At the hotel, CNN was covering the event and even the local news stations in Vegas had broken into the normal programming to give updates. It was odd to have flown across the country and see where I just came from on television. And even odder to think that I could have been on the firing line myself that morning.

The snipers also hit my wallet a bit, as the publication I was working on the review for called and left me a message saying they were no longer interested in the story. It would have been too upsetting to the readers they said, especially since the sniper (nobody suspected it was more than one person yet) was still on the loose and the area was in a true panic. I got a kill fee, (no pun intended) but since I had just about finished the review it was a small fraction of what I should have gotten. Anyway, I was just happy to be alive to tell you the absolute truth.

When I got back from Vegas the snipers were still at large, and had been busy claiming some new victims including a child at a local middle school, who thankfully survived the attack. Going back to work was a bit odd. I found myself moving to the middle of the crowd waiting for the train in the morning to give myself some cover. And my wife insisted on being dropped off in front of stores so she could dash inside quickly while I parked the car. I was left to dodge imaginary bullets in the parking lot, eying every single person I could see, even those far off on the horizon, with a great deal of suspicion. I remember thinking "that looks like a good sniper blind, so I will walk over this way to avoid it" like I was in downtown Beirut or something.

It was only much later, when the snipers had been caught, that I started to think about my freelance gig getting pulled. The implication was that somehow the Hitman game was related to these killings. It did not help at the time just before their arrest when a criminal profiler came on TV to announce that the shooter was probably a middle-aged white male who likes to play video games among other things. It turns out the profile was completely wrong and that the shooters were actually two black men who had nothing to do with computer games. But it just goes to show the mentality and also the fear that people were experiencing.

I eventually talked to the editor who pulled my piece and told him that the game was just fiction, just a lot of fun. As shooters go, it had a fairly low body count. You are only supposed to kill your targets, who are all mostly really bad people like drug lords or arms smugglers. You get penalized for killing innocents. My editor told me he thought games like that would be dead after the sniper killings, that nobody would buy them. I disagreed with him, but we left it at that.

It's nice to see however that fantasy and reality are different. In the computer game world a violent title, when done correctly using violence to advance the plot or in the case of Hitman to solve puzzles, gets a lot of successful sequels. Blood Money is the fourth game in the series, and it remains quite popular.

In real life, the snipers were caught and justice was served, although too late for a lot of innocent people.

So I guess people can make a distinction between fantasy and reality, even if the lines are blurred a bit during a crisis. Millions of people will purchase the new Hitman title, and probably none of them will be tempted to try anything like that in real life. After all, it's just a game.