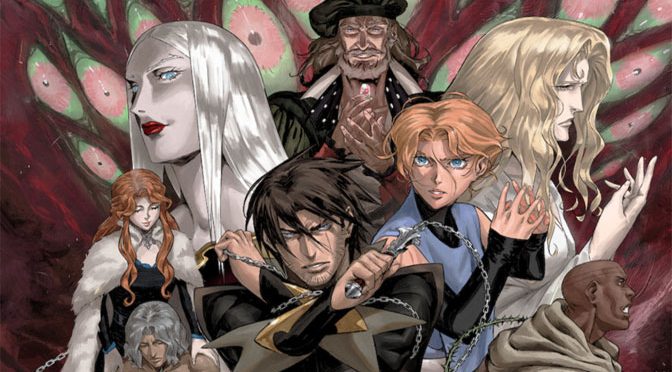 I spent most of my week pouring whiskey in my coffee as I fought through finals and I had no idea what I was going to write for this column. Then the news about the Castlevania anime dropping its final season in May gave me the perfect topic to discuss.

How about video game based animes, especially those on Netflix.

Normally any cinematic media based on video games is complete garbage. Almost every video game movie was bad in a way that makes you hurt inside. My case study would be Uwe Boll, who made movies such as BloodRayne, Postal and FarCry. Yes, FarCry. While I like he casted Till Schweiger as the main role, as he is a very underrated actor, however casting a German to play American Jack Carver felt… wrong.

Almost all of Boll’s movies take some famous actors and add a blemish to it. For example the aforementioned Schweiger (Farcry), Ben Kingsly (BloodRayne), Stephen Dorff and Christian Slater (Alone in the Dark) and J.K. Simmons (Postal). All of these movies were either boring, poorly written or just flat out missed the plot of the game entirely. Usually mentioning Uwe Boll in a conversation elicits moans and eye rolls.

Of course, a hall of shame would not be complete without Paul W.S. Anderson. While his original Mortal Kombat movie was received slightly well by fans, he is most notable for every Resident Evil movie and the new Monster Hunter movie. While I would watch his movies over Boll’s, that is crossing a bar low enough to hit my shins on it. Of course, he is also known for casting his wife (Milla Jovovich) in any role he can. Not to say she is a bad actress, she was awesome in The Fifth Element and The Fourth Kind, but it’s bad optics to always cast your wife as the lead role.

This started to shift with above average live action video game movies Detective Pikachu and Sonic The Hedgehog. Through great casting choices, both Sonic (James Marsden and Jim Carrey) and Detective Pikachu (Ryan Reynolds and Bill Nighy) brought solid acting to each character and budgets to match. What made these successful was staying just close enough to the source material to engage fans while still allowing flexibility with the stories.

Now, the anime’s been on another level and this is especially true for Castlevania, which I will get to in a moment. Video games Dragon’s Dogma, DOTA 2 and Castlevania have been turned into high quality anime. While I have not watched Dragon’s Dogma, I have seen all of DOTA and Castlevania. DOTA is more of a traditional anime, but the animation is crisp and the voice acting is great. If you love fantasy anime, this is a definite watch.

Castlevania, on the other hand, is the best anime I have ever seen. Full stop. The story is bloody and has curse words where they should be, but not enough to be off putting. The main voice cast is flat out incredible with everyone delivering their lines perfectly. Not to mention, season three brought in the previously mentioned Bill Nighy and Jason Issacs (Malfoy’s dad in Harry Potter) to play characters and they did perfect. The animation is top notch and illustrates facial expressions well and great fight choreography.

With Castlevania being such a well-loved series with deep lore I could see any number of ways it could go wrong. Instead, I have yet to meet a single person who disliked it and it took two episodes before my wife was hooked. The most recent run of movies and anime gives me hope that maybe, just maybe, we are going to start seeing better adaptations of video games going forward. Let me know what you think in the comments and I will try to get back with you and as always don’t forget to listen to the podcast.