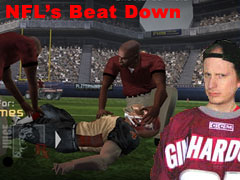 Over the last few weeks, my interest in professional football has waned down a bit. I don't know why it is. Maybe it's because the 49ers are doing worse than I thought they would (and coming off a 2-14 season last year, that's hard to believe). The fact that they are now depending on a $50 million waste like Alex Smith just scares me, and now the thought of a long, arduous rebuilding process is hard to bear.

My fantasy football team isn't doing much better either. As of last week, my record is 2-4 and not looking any better. The strangest part is in my division, I have the highest point total, but am still at the bottom. I might as well just give up the season and get some experience for future leagues.

The same thing applies to playing Madden 06. Though I am still waiting for the 360 version to come out, the fact of the matter is that I have started to get tired of the rules of the No Fun League (NFL), and its starting to wear our on me.

The strange thing is that I have been looking back at defunct leagues, especially the ill fated XFL. As I mentioned in commentaries past, I have always had interest in some of the concepts of Vince McMahon's attempt at football. Concepts such as making any punts over 25 yards a live ball (thereby removing fair catches or downed balls), as well as having true access to everything on the field (right down to hearing plays being sent to the quarterback), were a breath of fresh air.

Even better was how players were paid by how well they played, rather than receiving guaranteed contracts and signing bonus. I'm sure I don't need to mention to Chargers fans about the $31 million dollars they wasted on Ryan Leaf (and that even included $11.25 million for a signing bonus!)

In the end, the XFL ended up folding after one season, which has been the case for any football league that stands up to the mighty NFL. It's not just leagues that have fallen, but also television series as well. A few years ago, ESPN released a series called Playmakers, and I was hooked by its gripping storylines. However, the NFL found it too controversial. Even if the Cougars were not a real NFL team, elements such as drug use, domestic abuse, and players coming out of the closet was too much to handle, and just like the XFL, Playmakers was gone after one season. Ironically, the last line had the head coach telling a player to "turn the TV off."

Ironically, not only after canceling Playmakers, ESPN decided to take one of the best ideas that the XFL had. During their first game on NBC, the XFL had the "X-Cam," a behind the quarterback view that many fans of Madden became comfortable with. Now called the Visa Skycam during Sunday Night Football, they give no credit to the XFL for coming up with the idea.

The gaming industry is also affected by the NFL. Remember a few years how the No Fun League insisted that all NFL video games tone down on the level of violence? Well it ruined Midway's Blitz series. The previous release, Blitz Pro, tried an 11-on-11 game system, and attempted to stand up to the might Madden. Needless to say, it was a futile attempt. Lucky for Midway, the NFL was snagged by EA Sports, and with an exclusive deal, Midway is out of the NFL's grasp.

This year, Midway is attempting a unique twist to the Blitz series. By creating a new league, Midway can return their football series back to its hard hitting, violent origins. Even better, the creative staff behind ESPN's Playmakers is involved, and from what I have seen on their website, the game looks like they will succeed.

But it seems like the NFL is going against Midway again, since they found the game's ad "too extreme" for the NFL Network. Go figure.