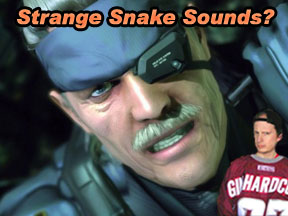 Yes I promised all of you I would not do a full column on EA, and I am keeping my word. Aside from mentioning that they are still in the running for Worst Company in America and how I will continue to vote for them to keep that honor, I am going to move on.

It appears that Snake is back, as the latest Metal Gear Solid game has been announced. MGSV: The Phantom Pain has been announced for both the Xbox 360 and PS3. (I wonder if this time Konami will actually ACKNOWLEDGE the 360 version in their ads, instead of jumping on the "Only on PlayStation 3" fake exclusive bandwagon like they did with Rising.)

Of course, as a huge Metal Gear fan (look at my recent review of Rising: Revengeance to see how much I liked it,) this is huge news to me. We will finally get to see Snake come back in one way or another, as well as most of the characters we have enjoyed over the past 15 years. We will even hear the legendary voice of David Hayter one more time. Let me go check his Twitter page and see what he has to say about it:

(from @DavidBHayter: Well look, at least I had a good run.)

Uhhhhh! I don’t like the sound of that. Let me expand this conversation. I see several people asking if Kojima asked him to return or if they got another voice actor. This is not looking good. I’d say this is an elaborate April Fool’s joke but the tweet is dated March 27. There are reports from Joystiq that when David was asked if Kojima asked him to return as Snake, he tweeted a simple reply: "Nope." However a search for said tweet came up as not found.

Kojima claimed that Snake will be played by a "new person. I can’t say who." However, David Hayter wrote an extended tweet (via TwitLonger) expressing his disgust over the matter.

So, here’s a recap of events:

I have been up in Toronto, for the past eight months, directing my first film, (WOLVES — 2013, TF1/COPPERHEART). On the December break, I came home to Los Angeles for the holidays. I heard then, that recording sessions for MG:V were being put together.

But I didn’t hear anything about whether I’d be needed or not.

So, I got in touch with someone involved in the production. We got together for lunch, and he told me that they "wouldn’t be needing me" on this game. No reason, or explanation was given beyond that.

And that was it.

I drove home through Laurel Canyon, bummed, and thinking about Snake.

To be clear, I love being a part of the world of Metal Gear. I admire its technological innovations, the gameplay, the political message of it all. But primarily, I love the fans of these games. Two grown men burst into tears upon meeting me at the Vancouver Fan Expo last year.

Now that is a rare and excellent role. You know you’re making an impact.

And I love doing it.

In 1998, I tried to do come up with a voice which epitomized the kind of worn, put-upon, genetically-engineered clone-soldier that I saw Snake to be. Over time, as the games became more stunning and visually sophisticated, I tried to transition that initial voice into the increasingly real environments in which Snake found himself. My level of success is up to you, but any perceived deficiencies were not for lack of hard work. I have dedicated a huge amount of time and effort into creating a compelling character, capable of expressing the myriad emotional, physical and psychological hurdles that Snake has to face.

If it were my choice, I would do this role forever. To hear anyone else’s voice coming from Snake’s battered throat, makes me a little ill, to be honest.

But the truth is, it’s not my choice. Any and all casting decisions are the sole purview of Hideo Kojima, and Konami itself. And that’s fair.

And I’ll get by. I am not lacking for employment on any level.

But I didn’t want anybody to think that I was intentionally abandoning them. And know that I will miss this job, and this character, very much.

My best wishes to you all,

This is unbelievable. And David, you aren’t the only one who is "ill" over this. I know it is the final decision of Kojima to not recast you, but it still hurts. I remember when you offered to do an audio interview for me, and that was the greatest honor I received in my young career as a reviewer. Then there was the special announcement you sent us regarding a future project. All of that meant something for me and it was great to see you literally become Snake. Even when playing the aging, near death Old Snake in MGS4, it was still your voice that made it magical.

And now you will not be voicing Snake in MGS V. I don’t know if I’ll ever be able to adapt. I went through this when Tara Strong replaced Arleen Sorkin in Batman: Arkham City. And when Splinter Cell Blacklist comes out, I will have to go through it again with Michael Ironside not reprising the role of Sam Fisher. But this stings the most, and I don’t know if I can hear Snake the same way again. I can only hope that fan outcry will take its toll and you will be announced to voice Snake come E3. Metal Gear Solid won’t be the same without you.

In the meantime I wish you the best of luck with Wolves when it is released.

STILL Voting For: EA to win the Worst Company In America.