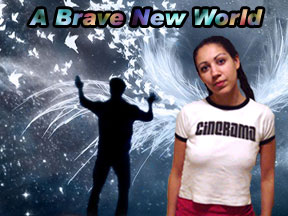 Until now, there hasn’t really been a good reason to buy the Kinect, other than idle curiosity and an overwhelming need to have the latest everything. But other than those obviously, understandable foibles, the games just haven’t been that enticing. They haven’t been "gamey" enough. For a long time, Child of Eden has been pegged as the first hardcore Kinect game. I’ve finally managed to put aside some time to give Child of Eden a go and I have to say, it’s as much a gamer’s game as Rez, its predecessor, was.

Child of Eden is essentially the spiritual successor to Rez and those that know me, will have heard me bang on and on, and on, and on about Rez. I loved it. Fortunately, Child of Eden is the Rez for the current generation of gaming. It’s everything I hoped it would be and frankly, we need more of these kinds of games. The only down side is, I haven’t managed to play it on Kinect, yet.

First let me try to explain the wonder that is Child of Eden. It has a Japanese load of old hokum story about a beautiful Japanese girl called Lumi. She is a human intelligence that is awakening inside Eden (the Internet), which must be purified in order for Lumi to survive. If you’re looking for narrative, then this game isn’t for you.

The game is essentially an on-rails shooter and your job is to string attacks together to defeat increasingly complex foes.

Enter scene one: floating in a psychedelic space ocean, a few lights dart across the screen and then appear to begin to morph into cell-like structures. The controller throbs to the beat of the music. As you shoot the structures, the music responds with electronic percussive sounds. The creatures get more complex and the music follows suit, drawing you in, deeper and deeper.

Playing Child of Eden is like going down the rabbit hole. Giant, transparent whales and manta rays glide across the screen with huge shoals of glowing fish swooshing around them. Child of Eden is, quite simply, beyond description.

This kind of game isn’t for everyone. It doesn’t have a story. It doesn’t fit the current yen for open world gaming. You can’t go where you like and explore every corner of the map. There are no big guns. There’s a Japanese girl floating about needlessly in space. No puzzles, nothing to collect. But it is exhilarating and it does make you smile.

That’s the first thing I noticed, when I started playing Child of Eden. It just made me smile. It was a welcome return to the sensory overload that was Rez on my Dreamcast. Every move you make in Child of Eden creates a cacophony of noises and a kaleidoscope of colours. Foes shattered into a myriad of shards, which you fly through before spiralling down into a tunnel. Then there’s the level with the lilies and the butterflies.

And the music is always just the right level of ambient electronica, during the quiet moments, before pitching it up to hardcore trance. Your heartbeat rises and falls with the music, as the controller thumps away in your hand. You’re in a complete trance. You can’t lift your eyes off the screen for a second and all you can think is: I wish my TV was as big as the wall.

We’re always calling games immersive, but Child of Eden is the only time I feel myself falling into the screen. It truly draws you in because it exploits your senses like no other game (except Rez).

With Child of Eden, you leave the testosterone at the door. It’s not about winning or killing. It’s about simplicity and floating away on that throbbing beat and those pulsating visuals. Just make sure you’ve got someone on hand to pull you back out.

Most played: Child of Eden

Most wanted: The Journey