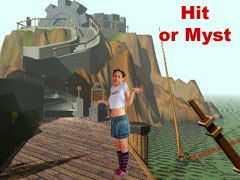 I think I'm in the midst of a crisis of faith dear play chums, or maybe I'm just bitter because the rest of the world has a PS3 and we Europeans have to wait until 2007. Although, I don't think I'd have bought a Sony Station this year, as it's a lot of money to fork out on yourself right before Christmas. So the delay did leave the way clear for Wii, but I haven't even pre-ordered one of those.

Maybe if there had been a console race I would be more enthused. If the Wii and the PS3 had been going head to head I'd be flying the flag and choosing my corner. I'd be poo pooing one in favour of the other and jeering from the cheap seats. But I'm not. In fact, I'd say I'm erring on the side of indifference.

I've got bigger fish to fry at the moment. It's that old life stuff getting in the way again. I'm currently in the midst of relocating from one side of the country, to the other. I'm leaving the smoggy streets of old London town and swapping them for the green, rolling, meadows, hills and dales of Somerset. Not only will I be nearer the countryside, but Somerset is also famed for its cider – that's the ancient English alcoholic apple based tipple, as opposed the American version, which I think refers to cloudy apple juice.

So here I am surrounded with boxes marked "books" and "DVDs" and "games" in fat black marker pen. My shelves are now surplus to requirement, apart from the valued job of displaying my Silver Surfer figurine. Soon I'll be moving on to pastures new with my lovely man and frankly next generation console launches pale into insignificance. Sometimes games just can't compete with the highs and lows of real life.

Now, I can hear your gasps and I already see the cloud of concern making its way across the Atlantic. But, do not worry your hearts my dear play chums, I am not leaving you, I shall merely pen my thoughts from a different location. So never fear, I shall still be regaling you with the lofty heights of my gaming musings, prompting raging debates and philosophical pontificating. But failing that, you can skip past my banal ramblings and just read the latest GiN review.

At a loss for any gaming distraction that won't suck our lives away, my boyfriend and I scoured the used sections of our local game store and found Myst for a mere Â£1. So, our Sunday was spent delving into a little bit of gaming nostalgia. Having not owned a PC back in the days of Myst, I had never dabbled. However, I do remember gasping at the graphics of the latest Myst at various trade shows and never having enough time to peruse the puzzles.

As the rest of the world hummed and buzz with the launch of PS3, I sat at home, scratching my head over switches and cryptic clues. Of course the graphics look pretty basic now, but then they were always only half the package Myst offered its fans. The story is very intriguing and the puzzles are tough enough to make my head hurt. But it made me realise that sometimes it's better to shift down a gear and look back, rather than stampeding forward in the eternal battle to have the latest thing.

For now, I'll use this crisis of faith as a moment to reflect on what has been and enjoy what I already have before moving on. Come 2007 though, I'll be champing at the bit, especially when I discover that it's either that or joining the local Morris Dancing troop (look it up, that's what Wikipedia's for folks).