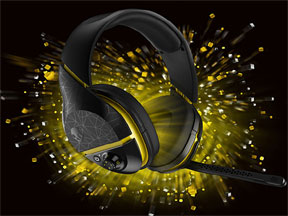 Skullcandy has always been known for headphones, but lately they have really made an effort to break into the gaming world. To that end, they released their own line of wireless gaming headsets, and asked GiN to take a look at the PLYR 2.

Now, I haven’t had a lot of luck with wireless headsets in the past. They either sound bad, or run out of batteries at the worst time, or don’t work right just a few feet away from my TV or monitor. So for the most part, I remain tethered to my gaming devices with wired headsets, which at the very least, are reliable. Though I’ve also almost hung myself a few times getting up to answer the phone while wearing one.

The PLYR 2 comes in an attractive yellow and black paint pattern that calls to mind those industrial levels of the old Half-life. It’s completely made of plastic and very light. The earphones are the big over-the-ear types that fit like a pair of earmuffs. Wearing the PLYR 2 is comfortable, though it fees a little tight on my larger head, even after adjusting it a bit. I suppose the light weight and the tight fit cancel each other out somewhat. You won’t forget that you are wearing them, but they never got uncomfortable either.

Setup of the unit on the PC was pretty easy, and only slightly harder on the PS3 or 360. How it works is that a little hockey-puck looking wireless dongle plugs into a free USB port on your PC. When active, a white skull lights up on the puck. You then use a mini-USB cord to attach the headset to the puck.

This is done to charge the headset. You unplug it when you want to use it. Otherwise, having wireless wouldn’t really be all the worthwhile.

On the PS3 or 360, you also have to hook up the 3.5mm audio ports and then go into the configuration and tell the console that you want to use the headset as the primary sound device for all gaming. The PC is smart enough to figure out that you want to use the PLYR 2, even if you have another audio source, like an HDMI cable that is carrying your sound. But the setups for PC and consoles are rather easy either way.

I would have liked to have found a bit more of an instruction manual with the PLYR 2. It could have alerted me to features that I found out about by trial and error, like the fact that the microphone automatically mutes itself when placed in the upright position. Those of you with a lot of experience with wireless headsets probably know these things, but it would have helped me out to have just a bit more information.

There is a little four way circular dial that controls volume and the balance between chat and game volume. Here again, a little bit of an explanation in the documentation might have been helpful. I found the placement of the switch to be quite natural. Simply reach up and push it the right direction, up for more volume or down to make things quieter, or left and right for the microphone/game balance.

The wireless headset worked a fair distance away from the computer. The range was about 45 feet, or slightly more if given a clear line of sight. I tested the sound quality on games like Call of Duty: Black Ops two and everything sounded great, though it was pretty clear that treble is given a bit more priority than bass. It was easy to pinpoint where fire was coming at me and turn to face it, but the deep booms of explosions were less impressive than when experiencing them through a strong pair of speakers.

The microphone worked well for teamplay. In fact, I was the best-sounding person on my team most of the time. Other gamers seemed to fade out sometimes, or were difficult to understand, but in testing this with a few other GiN gamers, everyone said I was pretty much crystal clear the whole time.

I also used the PLYR 2 for more boring uses, like a conference call through Skype. People said my voice sounded clear, but with somewhat reduced audio quality compared to when I was using a wired headset.

The PLYR 2 lasted for about four hours before it needed to charge back up. According to the charge light, it got a full charge after about 45 minutes of being plugged into the dongle. It also works when it’s plugged in and charging, though of course without the wireless features.

The only slight negative against the PLYR 2 is that the little volume switch tended to rattle around some, especially with games where I was ducking and weaving, or dancing, on the console. It’s not that big a deal, but I could hear the rattle each time, and it kind of served to pull me out of the game just a bit. Tightening that up would help.

The PLYR 2 is selling for $129 direct from Skullcandy, which makes it a good value at the entry-level end of the wireless headset spectrum. A little later on I will review an ASTRO gaming headset, which is a high end unit from a company that Skullcandy acquired. I expect it will offer more quality given the almost double price tag. But not every gamer has $300 to spend on their audio setup. For them, the PLYR 2 is a good alternative. It sounds good, the wireless is a really amazing feature that works well, and the price makes it a great value. I know I’ll be hard pressed to switch back to my wired unit for gaming after experiencing the freedom and quality that the surprisingly entry-level priced PLYR 2 offers. It earns 4.5 GiN Gems.