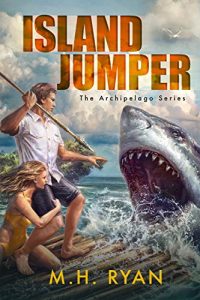 Hey all I’m back with a new series for this week’s Bookish Wednesday! It’s Island Jumper Book 01 by M.H. Ryan!

Plot: This is a survival drama story, mixed a bit with the harem genre. The premise is this, Jack Sawyer is a deckhand on a ship in the Caribbean and wakes up on an uninhabited and incredibly tiny island alone, with the last thing he remembers being the ship he was on going into a storm. It’s a fairly decent story, though by no means is it fantastic or outstanding. Frankly you can probably find dozens of books like this, but this is notable because there is a bit of supernatural mystery attached to this so it’s not purely plain old normal drama or the like.

Characters: We get to meet only a few characters in this entry, with Jack being the main character we get to see the world through. Benji is probably my favorite character, if only because her impersonations of people is hilarious. The rest of the cast is good, though Benji was by far my favorite of them all.

Overall: A fairly fun story, though it’s got some mysteries going on, there is a harem aspect to this story. If that isn’t your taste then you’ll definitely want to skip this, it’s by no means a must read.

For those who like: Lost (the TV show), Survival Fiction, Drama, Supernatural Mysteries, Fun Cast of Characters.

Not for those who don’t like: Harems or any of the above.