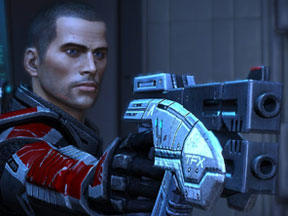 I always found it odd that the Mass Effect series wasn’t on the PS3. In an age where exclusive titles are rare, Mass Effect was one of a dozen or so top tier games that didn’t cross platform lines. That all changed in January, when Mass Effect 2 made the jump.

Those of you who have been reading GiN reviews and columns know that Mass Effect and Mass Effect 2 are great games. They are slightly different games in terms of their focus (the original was more of a straight RPG and the sequel is more of a shooter) but both are wonderful in their own way.

The original plan as I understand it was to bring both Mass Effect and Mass Effect 2 over to the PS3, something that could have probably been accomplished with a single disk given the amazing properties of the blu-ray player compared to the standard DVD on the Xbox. That didn’t happen more for licensing issues than anything else I suspect. Microsoft probably dusted off their original contract that prevented this from happening in some subparagraph. But all was not lost, and in fact, I think the solution that developer BioWare came up with is a really good one.

BioWare did two things to alleviate the situation. First, they included a ton of bonus content for free in the PS3 version. When you first boot the game, you can log into the PS3 network and use a code that nets you over six hours of bonus content in a massive 600M download. This includes the Lair of the Shadow Broker pack, which is great if you happened to pick Liara T’Soni as your romantic partner in the first game, because you can rekindle that romance as you track down the Shadow Broker in a really top shelf extra adventure. Secondly, BioWare included an interactive comic book created by Dark Horse comics as an exclusive PS3 gift. The book goes over the story of the first game and lets players make key decisions just like they would (or did on another platform) in the first game. This sets up the world of Mass Effect 2 to be just like you left it from the first game, or would have set it up if you never played it.

Having played the first game on the PC, the interactive comic book was a great way get the world perfect for me to play the second game. This way I got to make all the choices I did before without going back and playing the entire first game again on the PS3. I actually preferred this because I wanted new content, not to spend hours going over the old stuff. If you didn’t play the first game, have no fear. The comic book gives you basic choices that should be somewhat easy depending on what type of character you want to play. It’s a good idea to know if you want to be more evil or good before you do the comic book. Oh, and its Dark Horse, so the comic book itself is very, very good in itself.

Graphically, the game looks amazing with space effects the equivalent of anything you might see in a major motion picture. Character models are spot on for both major and minor roles, and even background people and creatures in cities. I don’t think very many titles look this good on the PS3. The only one that I think comes close would be Final Fantasy XIII. And Mass Effect 2 is a much better, or at least a more American-flavored, role-playing game.

From a role-playing point of view, a lot has been said about how ME2 is more of a shooter than the first game. The implication is that it’s less of an RPG. But I don’t really mind, and I’m a hardcore 800+ hour-on-Oblivion-playing RPGer. The role-playing in Mass Effect 2 is there, you just have to work a little bit harder for it. Whenever a dialog option comes up, you can always pick the choice that is straight to the right on the radial menu, which advances the conversation in the quickest way and gets you out of that sequence. However, you can also choose some of the options on the left, which lets you explore more intense dialog trees. This sometimes leads to side missions, extra experience and even romance. So you can pursue those options if you want, and if you do the game has what I think is a good balance between RPG and Shooter.

A lot of the armor and weapon loadouts have likewise been simplified, but I don’t really mind this either. The way it worked in the original game is you would purchase an armor upgrade, like Hardened Shields IV, from one of several manufacturers in the game. Each company had positives and negatives associated with their products and it was up to you to decide who on your team would get what weapons and armor and upgrades. In ME2, you scan interesting weapons and gear you find on missions and then can research them in your shipboard laboratory (once you have found the scientist). Most of the time the resulting upgrades can be used by your entire squad, assuming they are proficient with that weapon type. Armor upgrades pretty much help everyone equally. And there are a few technologies that only affect a single character, though this is the exception rather than the rule. Almost all upgrades have costs involved, both in materials you need to mine from planets and possibly in credits if you are buying the schematics from a store. The one minor pet peeve is that I wish you could sell some of your ore, because credits are in much shorter supply than anything else in the game. You never get to sell anything you find. Credits have to be acquired lying around on missions or paid to you by your employers.

The voice acting is some of the best I’ve ever heard, from famous stars like Martin Sheen, Claudia Black, Seth Green and Tricia Helfer to talented people from other BioWare games to relative unknowns who likewise put in great performances. The IMDB webpage that shows who did voices for the game is huge and there is not a bad performance among them. Some of the emotional sequences are very moving if you care to dig down into the game to trigger them. And I so do.

I did mark down the sound on ME2 by half a gem for two reasons. The repetitive musical traveling score is okay when you are just tooling around briefly on the galactic map, but gets a bit old when you are out mining for long periods of time. Secondly, the narration for the encyclopedia is perfect, but the voice is only used for primary entries and not secondary ones. As the only part of the game without full voice support, the fact that it’s missing is highly noticeable.

The gameplay is good, with fairly simple controls for giving orders to your squad on the PS3. Sometimes the squad members don’t do exactly what you tell them though, and they tend to occasionally make bad tactical choices when left on their own. It’s not as bad in terms of AI as most titles since in ME2 characters know how to take cover, but occasionally you will have companions doing suicidal charges for no good reason, or stepping into your stream of automatic weapons fire. Generally you don’t have to baby sit them, but there is always room for improvement.

Mass Effect 3 is set to come out on the 360, PS3 and PC and gamers are warned to keep their save files this time around, which I will certainly be doing. It’s great that BioWare choose to provide ME2 for the PS3 before the next game released, and their efforts at making gamers happy despite not having the first title available more than makes up for that shortfall. I would highly recommend Mass Effect 2 for any PS3 gamer. Other than Heavy Rain, this is the most fun I’ve had with my PS3 in the past year.