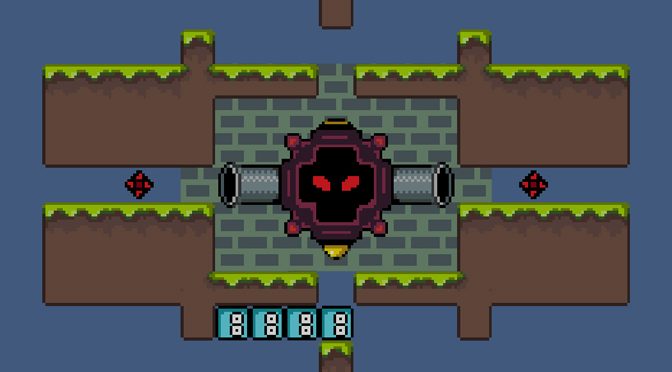 I was bouncing between a couple of interesting looking games for the Time Waster this week. Both are browser games with interesting puzzle elements. Unfortunately, one of the games simply would not load for me. Don’t really know why. I made a few attempts at reloading the website, but it just wouldn’t work. I guess it’s a good thing I had FL!P as a backup.

FL!P is a puzzle game that puts players in control of a blue block with eyes. There’s no story or anything here. Just puzzles to solve. Our little hero has a goal at the end of each level that they need to reach, but it isn’t as simple as just moving there. See, they can only move in one direction. To top it off, they can’t stop until they hit a wall. This means players will have to take great care in how they get the little fella to the goal.

This isn’t the first time that I’ve seen puzzles like this in a game. My earliest memory of dealing with something like this comes from Pokemon Silver with its ice sliding puzzles, but this isn’t Pokemon. FL!P quickly takes this simple concept and adds extra layers to it for more complex puzzles.

A good example of this includes multiple blocks and goals that that player must sit on all at the same time. There are also other slave blocks that the player can control to help them reach the goal, but they don’t count the level as complete if they touch it. That means they can actually get in the way too. Plus, there are plenty of switches to flip that open and close paths.

FL!P isn’t a very long game. There’s a total of 15 levels for players to complete, as well as a single boss level. The whole game takes about 10 minutes to 15 minutes, depending on how quickly the player can solve the puzzles. As far as I’m concerned, this is just the right amount of time. The game doesn’t overstay its welcome and remains fresh with the new concepts that it introduces. That’s important to me. I feel a lot of smaller games like this try to pad out the experience, which ultimately hurts them in the end.

The graphics in FL!P are simple, but pleasing. The game uses sprite art that isn’t all that complex. Honestly, it almost looks like the type of generic tiles and such the player would find in a game creation kit. I guess what I’m trying to say here is that it isn’t bad, but not really good either.

The audio is in the same lines as the graphics. It’s mostly just a few generic tunes that play throughout the game. Don’t get me wrong, these sounds match well with the visual presentation, but don’t do much more than that. You definitely won’t be humming any of them after completing the game.

Overall, FL!P is an interesting little puzzle game. It has a neat collection of puzzles and introduces some interesting twists along the way. It may not look or sound the best, but that doesn’t really get in the way of the game, either. It’s a good game to kill some time with for puzzle fans.