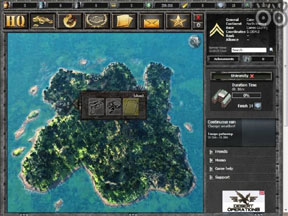 Conquer Your Friends and Foes, For Free

I love strategy games. They are a lot of fun and over the years I’ve gotten quite good at them, starting out playing Avalon Hill board games with their myriad of complex rules with a few friends and eventually getting up to the point where I was winning Axis and Allies tournaments at conventions. So when strategy games moved to the computer and eventually online, I was thrilled. No more hours-long setups, or trying to find an opponent who had also studied a particular game enough to present a challenge.

If you’re a five star armchair general like me, then Desert Operations is your new battlefield. There are literally thousands of people playing the game, and every time I logged on during my trial run, there were at least several hundred simultaneous players. There is no software to install. The game just runs in your browser. And since its free, there is no reason not to give it a try so you can start meeting all the other players.

Actually, at first, you probably won’t have much to do with anyone else. Desert Operations does a great job of protecting new arrivals. As you earn money and fame, it’s translated into points. And you can’t be attacked until you’ve earned 20,000 points or attack another player, which is pretty far along into the game. In fact, even later on, a certain ratio of relative points needs to be met between two players for a battle to take place, which prevents the top few armies in the game from mopping up everyone else, especially new players who have just had their protection expire.

I started my test game on a small island, which was funny because the game is called Desert Operations, but my place looked downright tropical. I shared this paradise with four other players, whom I eventually met up with. But for starters, I was the proud owner of a bunch of empty lots. Kind of hard to conquer the world using an empty parking lot, so I figured it was time to get started.

Thankfully you have a pretty huge bank account, so you can build things. And there is a very good tutorial that tells you what buildings you need to construct to get things started. You will need to build housing in the form of suburban-type dwellings and also skyscrapers. Not only will this give your people a place to live, but the rent generated provides income which you will need to have, because your starter money won’t last forever. Other buildings like the oil refinery will make you a needed resource like oil to help run your more advanced military machines. I wonder if any wars have ever been fought over oil in real life?

Probably the most important building under your command, other than the command center itself, is your university. Forget liberal arts classes. Here you will need to research a lot of technology in order to begin constructing units. In a lot of ways this was similar to the structure of Romadoria, which I also reviewed. However, since that game is set in ancient Rome and this one is in real life, the technology tree here made a lot more sense. For example, to set up an anti-tank rocket squad, you need to research Military Departments, Technics of Arms and Machine Guns. Makes sense. For something like a tank, you need all that plus things like diesel engines, smoothbore cannons, multiple levels of steel armor, suspensions and construction techniques. Physically you will also need to have constructed barracks and ammunition factories, plus support facilities like a simulation training hall and a firing range.

Needless to say, it takes a very long time before you even get your first army unit. That is probably my biggest problem with the game. The wait times just seem a little too long. The third building I constructed took two hours and two minutes. Basic research took over three hours. And you can’t build or research more than one thing at a time.

Here is where Desert Operations encourages you to spend money. You can hurry research or complete buildings by spending diamonds. Whereas a building might take three hundred thousand dollars and three hours to construct, if you sprinkle a couple diamonds at the workers, a building can be completed instantly. And where money comes in for free in drips and drabs from your facilities, the only way to obtain diamonds that I found was to pay real money for them. I don’t really mind this business model. In fact, I like it because you can play the game forever and never spend a dime if you are patient, or don’t need an army quickly to say, repulse an attack. But if you want to spend money, you can hurry construction along without really unbalancing the game against those who don’t spend. Everyone mostly gets to the same place eventually. It’s just a matter of how long it takes.

In any case, Desert Operations is more of a strategic game requiring deep thinking, and the long wait times do give you time to think and plan. Tactical "tank rush" type players may get bored, though the strategic folks like me eat stuff like this up with big heaping spoonfuls. That said, it might be nice if all the building and research times were halved across the board. Having to wait an hour to build something is a penalty that most people can live with. Having to wait three hours is an excuse to play something else in the meantime. And once players leave, there is no guarantee they will be back unless they’ve been hooked. Especially at first, buildings should fly up in minutes, not hours, while players are deciding if they like the game. The one good thing is that building continues while you are offline, so you could log in, give orders and then go do something else, which will probably be your strategy here when you are just starting out. Log in. Give a few build orders between classes or while the boss isn’t looking, and then come back in a few hours to see what happened.

For me, after a few days of building, researching and making an army, I was ready to join the fight. I had made friends with most of the people on my island, but found a good target. Eventually you can engage in espionage, which is a good thing. But I wanted to attack, so I went ahead and did it. Thankfully, my opponent had not researched much in the way of defensive technologies and had a smaller army than mine, so I won my first battle. The game calculates the spoils of war based on how much damage you do to your opponent among other things. Suffice to say that attacking (if you win) other players can be very profitable. This is a huge incentive for making war, which is nice to get the action going and keeping it going.

That said, there were a lot of friendly players online. I got invited into many alliances and even people who were not within my chosen group were pretty nice. And although I never asked a question, I saw a lot of others who did. Almost always, there was a moderator who came on and gave a good, concise answer. It’s so nice to see a company that takes enough pride in their game to have a moderator on duty pretty much all the time, or which makes for arrangements to have player moderators. Some of the new players asked very insightful or even tricky questions, but they always got answered.

Although I never became a big fish during my testing of Desert Operations, I was fortunate enough to join an alliance that was doing some impressive things. So I got to learn a lot about warfare and see how the battles worked. My guess is that my alliance will one day conquer the world on that server. And being a part of that history was a ton of fun.

Other than a little bit of slowness in the early game with build times, I had a lot of fun playing Desert Operations. And now that the review is over, I’m still playing, which says a lot.

Historically, it amazed me when board games about war went to the computer so long ago. But what amazes me today is that top tier titles like Desert Operations are free to play. The truth is that Desert Operations is worth spending money on, yet is given away for free. So you probably won’t feel bad if you decide to purchase a few conflict diamonds here and there, you know, just to grease the wheels of your empire. Blackmoon Games could easily get away with selling the game, and kudos to them for having an option to play for free. As such, Desert Operations is a tremendous value, and there is no reason not to give it a try.