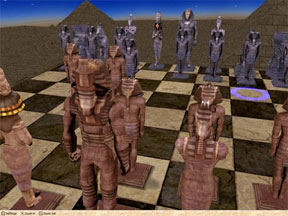 Here at the GiN labs, I seem to be alone in that, while everyone is excited about the new shooter or what-have-you, I tend to look forward to things like new chess programs. It is a lonely existence, but occasionally I am rewarded.

This time, I was rewarded twice. My editor came by and practically threw these at me, shouting, "What the"how are you supposed to blow the crap out of anything with a ‘pawn’? Here, see if you can make sense out of these." Or something like that. To be perfectly honest, I don’t really listen to what he is saying half of the time.

But there I was, with not only one, but two new chess programs. To avoid the ridicule for not having "bchew! pow!" noises coming out of my computer, I took them home and tried them out.

The first one I tried (in alphabetical order) was Chessmaster.

When I load a chess program, the first thing I tend to notice is the interface. Does it have too few hot buttons, so half the time I am resorting to memorizing hotkeys or going to a menu? Or does the sheer number of hot buttons actually get in the way of enjoying the game, because it is impossible to find anything, even though it’s all right there in front of you?

Chessmaster seems to walk right down the middle between these two extremes. There are few windows that you have the option of hiding if you don’t need them. The hot buttons at the bottom have descriptive enough pictures that you can likely guess what they are for, and they essentially contain the things you are most likely to need to do while playing chess (besides actually moving the pieces, that is). The navigation bar on the left (for switching play modes and so forth) is the same way.

Of course, like any modern chess program, you are given a large variety of piece and board styles, and can generally see them from any angle. There are even a few sets that are in ‘3-D’ – they even give you a pair of blue/red 3-D glasses to view them with. I can’t tell you how good those looked, because basically that kind of 3-D gives me a headache, so I took a pass.

One area where Chessmaster excels is in the training area. The Chessmaster Academy features instructional material by International Master Josh Waitzkin (a name that is likely to click only with aficionados of the professional chess world). It has tutorials for all levels, from beginner to expert, and the subjects vary from how the pieces move to the psychology of the game. I found it very educational.

Also, the game database is quite impressive, with over 530,000 entries, including recent Grandmaster-level games. Featured are about 800 of the most famous matches in chess history, dating as far back as 1619. The commentary on each move by famous chess players makes the quite a learning experience.

Now, the meat of any chess program is the chess engine. Chessmaster’s "The King" is pretty versatile, enabling it to simulate over 190 different opponents, each with its own skill level and play style. This allows virtually anyone to find opponents that will suit them. Of course, the higher-rated opponents make almost no mistakes, and should be an adequate challenge for most chess players.

I have no idea how well The King could stand up to a Grandmaster, but the people at UbiSoft seem to want to focus on Chessmaster’s teaching ability, which it does quite well.

Fritz 8 is a horse of a slightly different color, but just as good a ride.

I found the interface of the play mode a bit hard to manage, with much small buttons and not-so-intuitive menus. Of course the actual manipulation of the pieces was of course as simple as it could get – drag and drop.

One annoying feature in the basic play mode is the taunting. By that I mean, there is a voice that comments on nearly every move you make, and sometimes when you wait too long to make your move as well. Usually, the comments are inane, but a few are entertaining. Once. Yes, unfortunately, our friend only has about 20 taunts on file, so he soon begins to repeat himself. Do yourself a favor and disable this feature from the get-go.

The true strength of Fritz 8 is the power of its engines. That’s right – engines, with an ‘s’. Included in the package are about a half-dozen different chess engines. You can decide which one (or more than one) to play against, or have two of them play each other. You can even invite one of the engines you aren’t playing to watch the game and ‘kibitz’ for you, giving you advice on how to beat the other engine. (They must really hate each other!) There is even the option to add additional engines if the ones you get aren’t enough for you.

Just the Fritz 8 engine is pretty powerful though. It has always been in the top ten of chess engine world’s ratings (along with its cousin, DeepFritz) for quite some time. It has made pretty good showings when facing Grandmasters, so you know it has got to know its stuff. Chances are, unless my demographics are way off, it has what it takes to deal with the likes of you (and me, for that matter).

There is little chess education in this program, and why should it? They have a whole other product for that (Fritz and Chesster is a great learing program). Sure there are little things like a spy that let’s you see the next move the engine is considering, and the reasonably helpful Garry Kasparov videos (awful sporting of the man who tied Fritz in 2003), but largely this is a program for people who already know how to play the game.

You may notice I never talked about the online aspects of either game. This is because there is nothing new or special in that department. They each give you a free month on their respective online game service. Sure there are some things like ranking services and tourney scheduling, but largely this aspect is pretty much the same as everything else out there, including some sites like Pogo. Since you are playing another human instead of a program, the capabilities of the software don’t really come into play. Nice to know it is there however

So, the question you are no doubt about to ask: Which is better? Well, the answer is essentially, another question: What do you want out of a chess program? If you are looking to learn about every aspect of chess from the ground up, then Chessmaster is your baby. If you want to pit yourself against a series of really powerful engines, then Fritz 8 Deluxe is the way to go.

But definitely play Chess. This game is hundreds of years old in its current incarnation, and, believe me, there will come a day when the world will forget what Halo or Unreal ever were.

And Chess will still be around.

And I’ll probably still be the only one in the office playing it.