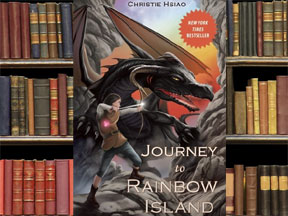 Journey to Rainbow Island reads like a manga mishmash of genres and mythologies wrapped in a New Age sensibility. Targeted to middle graders, the characters in the book have names like; Yu-ning (the heroine), Romeo (her best friend and semi-boyfriend), Metatron (the wise Magician), Leonidas (the flute playing lion) and Hobaling (the evil wizard). This is a message book, in which love always conquers and evil is always confounded.

The story starts out with young Yu-ning’s home being decimated by a resurrected dragon. Hobaling resurrected the dragon so he could gain possession of seven magical gems. During the attack the dragon kidnaps Romeo. Yu-ning and Romeo share a heart-shaped charm that erupts with all consuming light when they are demonstrating faith in love.

Yu-ning then embarks on a quest to find the stones and her friend. Along the way she combats a grey city filled with depression, a terrible toy factory that uses young orphans as labor and the dragon itself. The way one fantastic dilemma followed another reminded me of ‘The Neverending Story’ by Michael Ende.

Unlike in ‘The Neverending Story’ though, the protagonist never falters and Yu-ning does not go through any real soul searching. Yu-ning never really grows in this book since she already embodies the books central message. This is probably by design since the book’s cover references the author’s desire, ‘to create positive entertainment that is uplifting.’

Yu-ning, in addition to her magical powers of eliciting light and love is an archer. The illustration on the front of the book shows her with her heart shaped charm and bow confronting a dragon. This is not the archery of ‘The Hunger Games.’ The battles are relatively bloodless and the deaths occur mainly offstage.

The book has a corresponding app in the iOS App store, which is why we are reviewing it. The app is a free archery game, no doubt tailored to mimic the archery skill of Yu-ning. Unfortunately, the app is a static shooting game. Yu-ning stands still on the left side of the screen shooting fruit. When her arrow finds its mark the fruit is stuck to a tree. When the player hits a certain number of fruit, they advance to the next level, which is just like the previous level.

Periodically, a beautiful parrot flies across the screen, but it’s just there for good looks. You can’t shoot it.

This book is not for the mature gamer nor for the sophisticated teen. This book is for the middle grade reader who does not want to be too taxed in either language or theme. The app is amusing for a couple of minutes and then grows quickly repetitive with nothing really in the way of rewards.