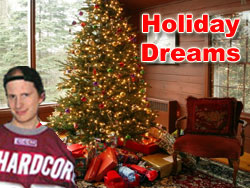 Ok I know I'm criticizing myself already and looking like a hypocrite by posting this. After all, I did mention that on yesterday's GiN Lounge how I usually don't celebrate Christmas, but instead I spend my anniversary with my girlfriend of nine years. But still as far as I'm concerned it is still the holiday season, and I plan to enjoy it in my own unique way. But if I did want anything for the holidays, these are what I would love to have:

Last week, the strum bar on my beloved Rock Band Wireless Strat controller broke after a year and a half of continuous use. While I can't play Rock Band in the immediate future for reasons soon to be explained, I'd love to get a new axe when my other problem is settled. If anything, I would be surprised if someone actually got me the full size $300 Fender Stratocaster replica. Of course I know there are those asking "buy why don't you use the Guitar Hero controllers that you have?" They don't feel the same! I favor the Rock Band axes much more.

AN XBOX 360 THAT DOES NOT GET THE RED RING OF DEATH!

Do we sense a trend here? Shortly after my axe got its broken string, my second Xbox 360 succumbed to the dreaded Red Ring of Death. Since then it has been sent to the Microsoft repair center in Mesquite, Texas, but once again, I am going to be suffering a three week withdrawal period until it is returned, hopefully as a newer model. The good news is I have my anniversary and MAGFest to keep me busy until my 360 returns, but still I wish that this problem would be a thing of the past. Same goes for the E74 errors, which I am glad to say I have never been a victim of *knock knock.*

Unfortunately the recession that has hit the country has hit everyone hard, myself included. It got to the point that I had to sell my Mac mini to help pay off the bills. The good news is I'm starting to recover from the recession but I'm now stuck with my old Vista laptop. Oh wait, I need to once again mention THAT has failed me as well, as I suffered a hard drive failure, and while waiting for the mail to get off their lazy rears and deliver my hard drive (which was shipped out via Priority Mail a WEEK ago,) I am stuck with both a 5 year old tower and my iPod touch to get online. I am hoping to get myself a new MacBook when my tax refund arrives but a little generosity never hurts.

Let me get this out of the way, and shove it down those haters over at Engadget (yes, I'm talking to YOU, Chris Ziegler,) I am happy with Sprint. I've been with them since 2001 and am not planning on breaking my contract. Of course, giving me a new phone every year at E3 helps out a lot. However, I am having issues with my HTC Touch Diamond.

No, it has not broken, and wasn't sold, but it is getting so glitchy that it's getting a mind of its own. Press the call button, it switches windows. Put the phone in my pocket, it turns on by itself and even makes calls. (Kelly will vouch for that.)

Recently my Tekken 6 rival just got himself a Palm Pre, and after playing with it a bit, I am jealous of him. Thankfully this might be one gift I am able to purchase myself. I did some research on Sprint's web site, and while the Pre itself would cost $550, after extending my contract for two more years and trading in my Touch Diamond, I could end up paying as little as $75 for it! Not a bad deal in my opinion. I might consider it.

Obviously you can tell that all I want is to replace my equipment that has either been broken, sold, or glitchy. Eventually all of these will be taken care of by the start of the New Year, even the laptop if the mail decides to send me my hard drive, but I guess until then I'll be just like a kid waiting for Santa to arrive and just wish.

For the rest of you, have a happy holiday, no matter what you do, or how you celebrate it.

Waiting For: My 360 to return. In the meantime, MAGFest.