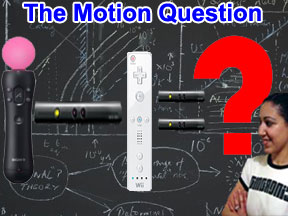 Controllers Vie For Your Cash

Back at E3 2009, Peter Molyneaux waxed lyrical about project Natal, which had some people reaching for the salt, but I must admit, I was excited. Milo, the demo kid, could apparently read expressions and react accordingly. Some called "smoke and mirrors," but with Natal due for release this Christmas, it looks like we could all be waving our hands in a virtual pool in less than a year.

Press reports seem to be favouring Sony’s move at the moment. It’s similarity to the Wii controller makes it a favourite with risk averse publishers and developers. Nintendo has already secured a market and Sony is just bringing, what we hope, will be a new and improved version to a living room near us. Of course, everyone seems to be ignoring the fact that the Move controller looks like a sex toy, but that’s another story.

At a time when money is tight, publishers don’t want to invest in untested technology that may or may not fire-up the public. This is especially the case when just next door there are two similar products, one of which has proven to woo the mainstream.

Microsoft has taken the bold step towards controller-free gaming, but it could be that nobody within the industry is prepared to go there too. This means Microsoft is going to have rely on its own development teams for games with enough wow factor to convince us that the joypad-come-remote is old hat. However, the first generation of thirdparty Move titles could prove just that, which could give Microsoft the advantage if it comes up with an alternative to Wiiware style games. I mean, it’s hard enough for me to drum up the energy to wash my actual windows, without washing virtual ones.

So far, Sony looks like its treading the safe and well-worn Wiiware path. The current crop of games heading our way feature, yes you’ve guessed it, bowling and other sports like boxing, running, jumping and shooting. Nothing new to see here – move along.

While the fact that Microsoft is going controller-free can be seen as a risky business by the industry, it could prove a winner among the mainstream. Haven’t we spent years admitting that joypads and controllers alienate those not well-versed in the ways of gaming? Didn’t we all coo about the Wii-mote and its accessibility? And hasn’t the sales of Wii consoles proved exactly this point? Based on all this evidence, surely, doing away with the controller altogether should be ultimate inclusive gaming manoeuvre.

Everyone can wave their arms around or stamp their feet (with obvious exceptions), which is what Natal requires from the gamer. For non-gamers this could be the most inviting aspect of Natal. No controller to get to grips with. Instead you just use yourself. You are the controller – what could be simpler?

If I had to choose between Move and Natal, my gut instinct goes with Natal, just because it has more potential for innovative gameplay. However, I have a nagging feeling that Microsoft let the Natal cat out of the bag a bit too early. So far, we haven’t seen anything of any real substance. I’m hoping this is because there’s a secret game in development that will literally blow our socks off. The reality could be that developers are having trouble getting anything decent and glitch-free to work, while Sony is churning out party games ready for Christmas.

I just hope Natal doesn’t stumble before it’s even out of the blocks because I think it could offer us something far more interesting than Sony’s sex toy, I mean Move, or 3D gaming combined.