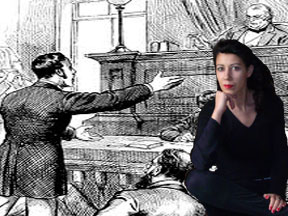 Chella Sets Up The Case

The games industry has had a bit of a shaky month, when it comes to its relationship with women. Just when you think we’re making great strides, it all falls to pot and we slide back another five years. It all started with the now notorious Hitman trailer and ended with vicious members of our online community attacking several women for daring to make their voices heard. For an industry that sees increasing the number of female gamers as the Holy Grail, we really don’t do ourselves any favours. The business of games and gamers need to take a long, hard look at themselves and shake off the misogyny ‘ it’s really time to move on.

But first, let’s look at the poor performance of the last few weeks in the case of: Games vs Women.

Exhibit A in games vs. women

So, as I said earlier, it all began with the Hitman trailer or ‘nun-gate,’ as I like to call it.

Of course Square Enix held their hands up in butter-wouldn’t-melt astonishment, claiming they hadn’t intended to cause offence or be exploitative or derogatory in any way. So when they decided to focus on the killing of a string of S&M nuns with habits and suspenders flying, they didn’t at any point think, ‘this could be controversial?’ No, of course they didn’t.

Hitman has a sorry history when it comes to sexualising dead women, though. Remember the ‘beautifully executed’ ad campaign? This featured a woman in lingerie, splayed on silk sheets with a bullet shot to the head and the ‘beautifully executed’ strapline. So we were invited to gaze at the body of a dead woman and revel in the clearly sexual connotations. Not Eidos’s proudest moment, but worse still, the current publishers don’t seem to have learnt from past errors in judgement.

Exhibit B in games vs women

Next up is the Lara croft rape controversy. Lara Croft, despite her large assets and sexy pin-up status, is one of the most independent, intelligent and powerful female games characters. She’s out there, on her own, raiding tombs, killing bad guys and scaling walls on her own terms. She doesn’t have time for a relationship and certainly doesn’t need a man to help her.

In the series reboot, Crystal Dynamics has decided to do Lara’s origin story. This game features young Lara, before she has all her badass skills and confidence. So she’s more vulnerable, more easily scared, but essentially, the strong Lara is there just waiting to bloom. Or so I thought. However, I saw the latest trailer and the vulnerability is overplayed, as Lara screeches, gasps and whimpers her way through a forest, wounding herself on every sharp object within a 50 mile radius. Crystal Dynamics has taken a powerful female character and made her a bit Bella from Twilight.

Post-E3 2012, the game’s producer, Ron Rosenberg, was interviewed by Kotaku and it was there that he said this, "When people play Lara, they don’t really project themselves into the character. They’re more like ‘I want to protect her.’ There’s this sort of dynamic of ‘I’m going to this adventure with her and trying to protect her.”
The Kotaku article then explains how Lara will be tested in the new game. ‘Her best friend will be kidnapped. She’ll get taken prisoner by island scavengers. And then, Rosenberg says, those scavengers will try to rape her.’

The alleged ‘rape’ of Lara has caused a media storm. Crystal Dynamics released a statement categorically denying the existence of a rape scene or that sexual assault is a theme of the game.

Whether or not there is a rape scene, I’m still troubled by Rosenberg’s approach to gaming’s strongest female figure. He said, ‘When you see her have to face these challenges, you start to root for her in a way that you might not root for a male character.’ This implies that male gamers can’t relate to a female character and completely denies the existence of female gamers. Why does a female character have to be protected? I don’t feel the need to protect Solid Snake or Ezio.

Is a powerful female character so threatening or disconcerting that Rosenberg feels the need to break, batter and bruise her, to garner some weird sexualised paternal instinct towards her? Added to this, the rape/revenge storyline in female character arcs is a lazy narrative crutch. Why does a woman have to be raped to become strong? Is Master Chief going to have to fend off a rapist in Halo 4? You know, just so that we can identify with him better and feel protective towards him. No, I didn’t think so.

Exhibit C in game vs women

Hot on the heels of nun-gate and the rape of Lara, we’ve got the gaming community itself and an increasing slew of online attacks on women. It seems that there’s a pocket of gamers who like their women in chainmail bikinis, draped over motorcycles and popping out of leather basques or nun outfits, but most importantly they must be silent. Woe betide a woman who wants to vent about some aspect of the games industry, especially if they mention the f-word; that’s ‘feminism’.
The latest incident came to me via Will Wheaton’s stream on google plus and concerns a Kickstarter project called ‘Women vs Tropes: Video Games by feminist and pop culture critic, Anita Sarkeesian.

She wants to make a documentary that looks at female games characters and how they fall into certain stereotypes or tropes. It sounds like a great project, but a certain strata of the online community thought otherwise.
Anita’s youtube channel was overwhelmed by sexist comments, death and rape threats and personal attacks. Not content with this, they put porn on her Wikipedia page. Then Felicia Day, of The Guild and general female geeky loveliness fame, created a song called ‘gamer girl and country boy,’ which, bafflingly, elicited the same type of abuse. And just in case we thought these were fluke incidents, actress Aisha Tyler, presenter at Ubisoft’s E3 2012 press conference, was also victim of online abuse and racism, accusing her of not being a gamer because she’s a woman.

The good news is Anita Sarkeesian raised almost $150,000 more than her original project goal, proving that most gamers aren’t racist misogynists. Meanwhile, Aisha Tyler answered her attackers with a blistering repost on her Facebook page.

The bad news is we have a problem. There seems to be an assumption that women can’t really be gamers. And apparently Felicia Day’s song incurred such wrath because of the term ‘gamer girl,’ which the trolls say refers to a girl who plays games to get attention from guys. Um’I can tell you one thing, if I need male attention there are much quicker ways to get it than playing 90 hours of Skyrim.

Ubisoft’s Jade Redmond often meets the same kind of abuse. The comments on the bottom of any of her interviews usually get round to the fact that she’s only in her current position because she’s pretty. Posters often suggest that she’s leap-frogged male counterparts because she’s attractive and female ‘ I guess these commentators haven’t heard of the glass ceiling. It’s assumed that she can’t possibly have got to where she is because she’s talented and good at her job, which is a position gamers need to rethink if we’re ever going to make headway.

However, there’s one thing not believing a woman is talented or a real gamer or that her point of view is stupid or misinformed, but there is never ever, ever any justification for threatening her with rape and death or hurling anti-Semitic, racist and misogynistic abuse at her. It’s not funny or clever and it does our industry and our community a great disservice.

The Verdict: The games industry does have issues when it comes to its portrayal of female characters. Denying it or abusing anyone who speaks out about it won’t make it go away. The industry and its community have some growing up to do. We are making strides, but sometimes we stumble a few steps back and that’s a shame.