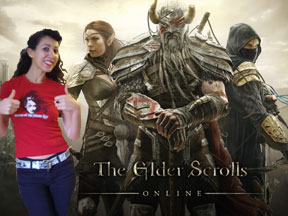 “You are an unknown prisoner…” these are the words that greeted me as I entered the Elder Scrolls Online (ESO) beta, making me feel like I was in familiar territory, from the word go. This text was there instead of the introductory cinematic, which will be unveiled on the official launch day, I’m assuming. It set the scene, accompanied by some lovely artwork. To say ESO is anticipated, is an understatement. The MMORPG landscape has been fairly quite over the last year or so. Now we’ve got two great, white hopes on the horizon – ESO and EverQuest Next. One is an established MMO brand, with a dedicated following and an experienced team behind it. The other is the dominating fantasy, openworld RPG on consoles, but now it’s making the leap to MMO. The question is, does ESO have what it takes to give ‘EverCrack’ a run for its money?

Never one to disappoint, I shall begin with the character creation. For me, this makes or breaks a game and is one of the reasons City of Heroes is still the one to beat on this front, despite its demise. ESO has one of the better character gen stages, but nothing groundbreaking. There are several races to choose from, including Redguard (black people, Latin, Asian and other brown-skinned types), Nords (Viking-like warriors), Khajilt (the cat people), and the Argonians(the lizard people), as well as your usual array of elves and orcs. This is fantasy, after all. Each race has an alliance, which I’ll go into more, later. If you’ve played Elderscrolls, you’ll be familiar with the wide array of variables, including eye shape, cheekbone height, lips, ears, various hairstyles and tattoos, as well as spots and markings for the anthro races.

I created a Khajilt and was impressed by the sheer range of cat-faces it had, from sharp and pointed,like a cheetah, to the broader face types of a jaguar or tiger. As this was a beta, I didn’t spend that long on the character gen, as I normally would. In addition, the server kept kicking me, so in the end, I just picked a randomly generated character and tweaked a few things.

Before you can even start to tweak your looks, it’s time to pick your race and allegiance. Each race has an affinity for certain skills, whether it’s stealth as a Khajilt, magic, as an elf, or hitting stuff with your two-handed weapon expertise, as a Nord. It does make character creation feel a little limited, as a Khajilt mage isn’t playing to your race’s strengths, but this being Elderscrolls, it’s all about what you use and level up in-game, making it difficult to make an informed decision. I’m not sure how big a part the race affinities play, so I went ahead and created a Khajilt templar, equipping the regeneration staff, making me a healer, and then picking up a bow and some magic along the way.

Once you pick your race, you are automatically assigned an alliance. The three alliances and their races are; Daggerfall Covenant (Breton, Redguard, Orc) , Aldmeri Dominion (High Elf, Wood Elf, Khajilt), Ebonheart Pact (Nord, Argonian, Dark Elf). The races are divided and aligned according to their homelands, so geographical neighbours have been united.

The alliances may play a key role in the story, but it does feel like a key player decision has been taken away. It’s unclear how the alliance impacts on gameplay, after such a brief time with the game. However, each alliance starts the game in completely different parts of the world. This means, despite knowing around five people on the beta, none of us managed to meet up, as we were scattered to the four winds. The Nords are on some snowscape and I, playing a Khajilt, entered a land of palm trees and North African style temples. None of the GiN team managed to determine whether players from different alliances could group. We’re all hoping that we can group across alliances, otherwise this is a real handicap and weights the gameplay too much towards PvP.

With character gen over, it was time to enter the world. For anyone who has played Elderscrolls, I think you’ll be happy with its conversion to MMO. There is a familiarity, which makes it feel like a living, breathing world. The Elderscrolls games always felt like an MMO to me because of the freedom it allowed you and the quality of the NPCs, going about their business. The only drawback was that it felt like an MMO without any players. Now, that’s been fixed. And for me, one of the most brilliant touches was that I found it really hard, at times, to tell who was a player and who was an NPC. In most MMOs, it’s clear that the person break dancing in full plate armour is a player or the one hitting jump repeatedly. Those are mood breakers, but I didn’t get that on the ESO beta, which was nice and something I hope it can maintain, but somehow I doubt it. If you give them break dance, they will break dance.

As I mentioned earlier, you begin in a prison cell and it’s the old faithful, break out of prison and storm the guards with your fellow inmates. Then it’s time to select your weapon, along the way and then embark on the tutorial adventure. The tutorial was a bit patchy, leaving me not knowing how to access my menus, such as the map. At one point I was told how to sneak, but promptly forgot and could never find it again. The world is littered with treasure chests, but I didn’t know how to unlock them. Similarly to me, our mighty editor, John, wasted a host of lockpicks trying to access these chests. A little on-screen hint would have been nice.

Once out of the prison, I found myself in the home of the Khajit and had a growing array of missions to complete, as I saw fit. All the NPC interactions are voice-acted, which is always a bonus and you are given decisions to make, such as whether to defend the actions of an NPC you’ve been helping or just watch them get arrested. It’s worth noting that John ended up off the coast of Skyrim and then went to the Argonian homeland as part of his early questing, so your starting point in the world is going to be different as you complete increasingly advanced tutorials.

With a few quests completed, my character was building skills and items, at quite a pace. I managed to pick up a bow from somewhere and really enjoyed it, once I added the poisoned darts to my armory. I also took a knockback power, which was a great combination with the bow. One drawback of the bow, if you draw it, while in stealth mode, you will pop out of stealth, so don’t to expect to be a sneaky archer any time soon, unlike the offline experience. This could be a mistake or something done to balance the power of the bow. However, the poison arrow takes down most opponents before they even get close. In addition, once your special ability gets to level four, you can morph it into something more powerful, which just gets stronger, the more you use it.

The missions I encountered were interesting and the NPCs all had intriguing stories, which made it feel like a living, breathing world within a bigger story arc. The combat uses a targeting system, giving it more of an action feel than most MMOs. In addition, when a foe is attacking you, a red attack area appears and you get the opportunity to dodge by double tapping a key. This is a refreshing change to the usual MMO style combat, which entails hitting numbered keys, as the powers recharge. ESO allows you to dodge and block, adding a bit of strategy.

As to be expected, ESO looks very nice indeed. However, as a console gamer, I do always despair when playing on PC, as I never have a powerful enough system to see the graphics on ‘high’. I had to content myself with medium and low or ‘off’ on some things. I took a look at the game on my other half’s PC and it looked great – nice textures and lighting effects. All I can think is, if this was on console, I’d be able to see those graphics too. Harrumph to PC gaming and graphics cards.

I didn’t delve into the crafting, but John did, so here’s what he had to say:

The crafting is very accessible. It’s just a question of going to the crafting station and starting to work. You can also craft items far about your level, so someone could become an expert smith, for instance, without having to also become an adventurer. I also dabbled in alchemy, cooking and enchanting, but really focused on woodworking and smithing. I reached level three, as a smith and crafted some really good gear, including full amour. I also reached level three as a woodworker and got assigned an assistant, which cost me a skill point, but I think it will be worth it. The assistant is supposed to bring you the woodworking raw materials, everyday, including special items and sometimes finished projects. Unfortunately, the beta was over before I could use my assistant. Hopefully he will have a pile of stuff waiting for me on the next go-around if he kept busy.

I was disappointed that you could not craft jewelry, even as a smith or a tailor. When you enchant, you end up with a little gem that can be applied to types of gear. You can add specific gems to armor, weapons or jewelry. However, I only got one weapon gem, which I used to add magic damage to my bow, but found eight jewelry gems, making it more surprising that you couldn’t craft jewelry. I couldn’t even buy any jewelry, so that was a bit sad.

Beta weekends always fly by, so I’m hoping for more time on subsequent open days. I’m definitely intrigued by ESO. It doesn’t feel particularly fresh, apart from the action-oriented combat system. As a role-player, I’m concerned that PvP will dominate the game, which would be a shame, as it feels like the MMORPG the Elder Scrolls should have been all along. ESO is definitely one to watch, but I still think EverQuest Next is bringing a lot more cards to the table – as we haven’t even seen EverQuest Landmark yet, only time will tell us if my hunch is right. In the meantime, ESO has a lot to offer, in terms of a beautiful world, some interesting powers and intriguing characters.